Longing for Darkness: Tara and the Black Madonna (Paperback) 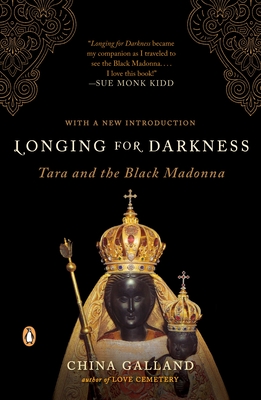 Longing for Darkness: Tara and the Black Madonna (Paperback)

With this book, China Galland brought increased attention to the spiritual traditions of the Black Madonna and other cross-cultural expressions of the feminine divine. The popularity of recent works by authors like Sue Monk Kidd and Kathleen Norris have only increased readers’ fascination. Now with a new introduction by the author, Longing for Darkness explores Galland’s spellbinding and deeply personal journey from New Mexico through Nepal, India, Switzerland, France, the former Yugoslavia, and Poland—places where such figures as Tara, the female Buddha of the Tibetan tradition, and the Black Madonna are venerated today.
China Galland is the award-winning author of Longing for Darkness: Tara and the Black Madonna. This highly praised nonfiction work on finding the feminine face of God was called "vivid, vulnerable, and courageous" by The New York Times, "exhilarating" by the San Francisco Chronicle, and a "fascinating journey" by Isabel Allende.

Ms. Galland has been research associate at the Graduate Theological Unions' Center for Women and Religion in Berkeley and is the founder and director of the Images of Divinity Research Project. She has been a popular Bay Area writing teacher, co-director of the Women and Girls Jail project, "Free Spirits," and lectures widely on the topic of the divine feminine.

She received a Hedgebrook Writers Invitational Residency and has won awards for her writing from the California Arts Council. Galland is a professor in residence at the Center for the Arts, Religion, and Education at the Graduate Theological Union in Berkeley, California. She lectures, teaches, and leads retreats nationally and internationally on religion, race, and reconciliation.

The heartfelt account of a search for the feminine face of God . . . vivid, vulnerable, and courageous. (The New York Times Book Review)

Longing for Darkness became my companion as I traveled to see the Black Madonna in Einsiedeln, Switzerland. . . . It was a particular joy for me to read, not only because of the deeply moving journey described in its pages, but because of its passionate exploration of the Black Madonna. I love this book! (Sue Monk Kidd)