Ta Hsueh and Chung Yung: (The Highest Order of Cultivation and On the Practice of the Mean) (Paperback) 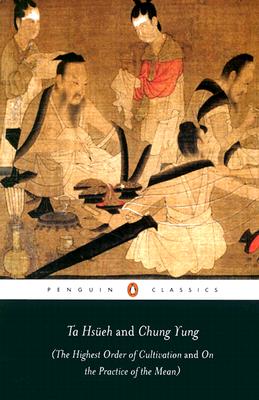 Ta Hsueh and Chung Yung: (The Highest Order of Cultivation and On the Practice of the Mean) (Paperback)


Email or call for price
Set alongside The Analects and Mencius, these two texts make up the 'Four Books' of Chinese Confucian tradition. Their depiction of the 'Way of Great Learning' focuses on the moral tenets of Confucian thinking, establishing a universal framework that links individuals with the cosmos. By drawing together key ethical and philophical, and metaphysical issues, the essays deal with the individual's development of moral character. They have long occupied a central position in the educational and political infrastructure of China, Korea and Japan, and their influence and popularity continues to grow, in the East and in the West.

For more than seventy years, Penguin has been the leading publisher of classic literature in the English-speaking world. With more than 1,700 titles, Penguin Classics represents a global bookshelf of the best works throughout history and across genres and disciplines. Readers trust the series to provide authoritative texts enhanced by introductions and notes by distinguished scholars and contemporary authors, as well as up-to-date translations by award-winning translators.
Andrew Plaks is Professor of East Asian Studies at Princeton University. He has published widely on Chinese philosophy and religion.

Xinzhong Yao is Professor of Religion & Ethics at the University of Wales, Lampeter.