A Holy Baptism of Fire and Blood: The Bible and the American Civil War (Hardcover) 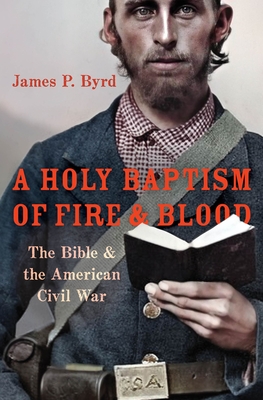 A Holy Baptism of Fire and Blood: The Bible and the American Civil War (Hardcover)


Usually Ships in 1-5 Days
In his Second Inaugural Address, delivered as the nation was in the throes of the Civil War, Abraham Lincoln proclaimed that both sides read the same Bible and pray to the same God, and each invokes His aid against the other. He wasn't speaking metaphorically: the Bible was frequently wielded as a weapon in support of both North and South. As James P. Byrd reveals in this insightful narrative, no book was more important to the Civil War than the Bible. From Massachusetts to Mississippi and beyond, the Bible was the nation's most read and respected book. It presented a drama of salvation and damnation, of providence and judgment, of sacred history and sacrifice. When Americans argued over the issues that divided them -- slavery, secession, patriotism, authority, white supremacy, and violence -- the Bible was the book they most often invoked. Soldiers fought the Civil War with Bibles in hand, and both sides called the war just and sacred. In scripture, both Union and Confederate soldiers found inspiration for dying-and for killing-on a scale never before seen in the nation's history. With approximately 750,000 fatalities, the Civil War was the deadliest of the nation's wars, leading many to turn to the Bible not just to fight but to deal with its inevitable trauma. A fascinating overview of religious and military conflict, A Holy Baptism of Fire and Blood draws on an astonishing array of sources to demonstrate the many ways that Americans enlisted the Bible in the nation's bloodiest, and arguably most biblically-saturated conflict.