The Disappearing Spoon: And Other True Tales of Madness, Love, and the History of the World from the Periodic Table of the Elements (Hardcover) 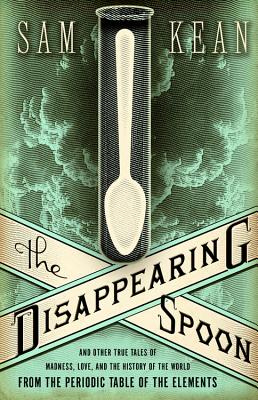 The Disappearing Spoon: And Other True Tales of Madness, Love, and the History of the World from the Periodic Table of the Elements (Hardcover)

Why did Gandhi hate iodine (I, 53)? How did radium (Ra, 88) nearly ruin Marie Curie's reputation? And why is gallium (Ga, 31) the go-to element for laboratory pranksters?

The Periodic Table is a crowning scientific achievement, but it's also a treasure trove of adventure, betrayal, and obsession. These fascinating tales follow every element on the table as they play out their parts in human history, and in the lives of the (frequently) mad scientists who discovered them. The Disappearing Spoon masterfully fuses science with the classic lore of invention, investigation, and discovery -- from the Big Bang through the end of time.

Though solid at room temperature, gallium is a moldable metal that melts at 84 degrees Fahrenheit. A classic science prank is to mold gallium spoons, serve them with tea, and watch guests recoil as their utensils disappear.
Sam Kean is the New York Times bestselling author of Caesar's Last Breath, The Tale of the Dueling Neurosurgeons, The Disappearing Spoon, and The Violinist's Thumb, all of which were also named Amazon top science books of the year.

The Disappearing Spoon was a runner-up for the Royal Society of London's book of the year for 2010, and The Violinist's Thumb and The Tale of the Dueling Neurosurgeons were nominated for the PEN/E.O. Wilson Literary Science Writing Award in 2013 and 2015, as well as the AAAS/Subaru SB&F prize.

His work has appeared in the Best American Nature and Science Writing, the New Yorker, the Atlantic, the New York Times Magazine, Psychology Today, Slate, Mental Floss, and other publications, and he has been featured on NPR's "Radiolab," "All Things Considered," and "Fresh Air."
"It happens often in biology, but only once in a rare while does an author come along with the craft and the vision to capture the fun and fascination of chemistry. Sam Kean's The Disappearing Spoon is a pleasure and full of insights. If only I had read it before taking chemistry." --Mark Kurlanksy, author of Salt and Cod

"If you stared a little helplessly at the chart of the periodic table on the wall of your high school chemistry class, then this is the book for you. It elucidates both the meanings and the pleasures of those numbers and letters, and does so with style and dash." --Bill McKibben, author of Eaarth: Making a Life on a Tough New Planet

"The Disappearing Spoon shines a welcome light on the beauty of the periodic table. Follow plain speaking and humorous Sam Kean into its intricate geography and stray into astronomy, biology, and history, learn of neon rain and gas warfare, meet both ruthless and selfless scientists, and before it is over fall head over heels for the anything but arcane subject of chemistry." --Bill Streever, author of Cold

"The best science writers...bring an enthusiasm for the material that infects those of us who wouldn't usually give a flying proton. Sam Kean...unpacks the periodic table's bag of tricks with such aplomb and fascination that material normally as heavy as lead transmutes into gold. With the anecdotal flourishes of Oliver Sacks and the populist accessibility of Malcolm Gladwell...Kean succeeds in giving us the cold hard facts, both human and chemical, behind the astounding phenomena without sacrificing any of the wonder--a trait vital to any science writer worth his NaCl. A-" --Entertainment Weekly

"Sam Kean...is brimming with puckish wit, and his love for the elements is downright infectious. Kean's book is so rambunctious and so much fun, you'll find yourself wanting to grab someone just to share tidbits. But the alchemy of this book is the way Kean makes you see and experience and appreciate the world differently, with a real sense of wonder and a joy of discovery, that is downright elemental." --Caroline Leavitt, Boston Globe

"This is nonfiction to make you sound smart over gin and tonics: the human history behind the periodic table." --Time.com

"Sam Kean...has done something remarkable: He's made some highly technical science accessible, placed well-known and lesser-known discoveries in the contest of history and made reading about the lives of the men and women inside the lab coats enjoyable." --Austin American-Statesman

"Fascinating. Kean has Bill Bryson's comic touch when it comes to describing genius-lunatic scientists...The book is not so much a primer in chemistry as a lively history of the elements and the characters behind their discovery." --New Scientist

"A quirky and refreshingly human look at a structure we usually think of as purely pragmatic." --SeedMagazine.com

"[The Disappearing Spoon is] crammed full of compelling anecdotes about each of the elements, plenty of nerd-gossip involving Nobel prizes, and enough political intrigue to capture the interest of the anti-elemental among us. Once you're done with this book, do your chemistry teacher and all her future students a favor, and send her a copy." --Galleycat

"Kean loves a good story, and his account teems with ripping yarns, colorful characters, and the occasional tall tale of chemical invention....let us hope that Kean...continues to bring the excitement of science out of the lab and into the homes of the American reading public." --Chemical & Engineering News

"An idiosyncratic romp through the history of science. The author is a great raconteur with plenty of stories to tell....entertaining and enlightening." --Kirkus Reviews