Middle School, The Worst Years of My Life (Paperback) 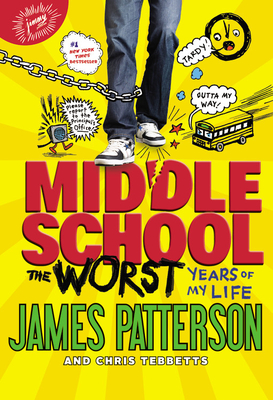 Middle School, The Worst Years of My Life (Paperback)

This is book number 1 in the Middle School series.

Discover the #1 bestselling middle-grade comic that inspired a major motion picture: Children's Choice Award winner James Patterson has never been more hilarious and heartwarming.
Rafe Khatchadorian has enough problems at home without throwing his first year of middle school into the mix. Luckily, he's got an ace plan for the best year ever: to break every rule in his school's oppressive Code of Conduct. Chewing gum in class: 5,000 points! Running in the hallway: 10,000 points! Pulling the fire alarm: 50,000 points! But when Rafe's game starts to catch up with him, he'll have to decide if winning is all that matters, or if he's finally ready to face the rules, bullies, and truths he's been avoiding.
James Patterson's debut middle-grade novel addresses some of middle schoolers' biggest issues: bullies, first crushes, and finding out what makes each of us special, all with a hilarious main character and fantastic in-text illustrations that are sure to have young readers begging for more!

James Patterson has had more New York Times bestsellers than any other writer, ever, according to Guinness World Records. Since his first novel won the Edgar Award in 1977 James Patterson's books have sold more than 300 million copies. He is the author of the Alex Cross novels, the most popular detective series of the past twenty-five years, including Kiss the Girls and Along Came a Spider. He writes full-time and lives in Florida with his family.

"A keen appreciation of kids' insecurities and an even more astute understanding of what might propel boy readers through a book.... a perfectly pitched novel."—Los Angeles Times

* "Patterson artfully weaves a deeper and... thought-provoking tale of childhood coping mechanisms and everyday school and family realities.... Hand this book to misbehaving, socially awkward, or disengaged boys and girls.... It might help them believe that there is a place for them in the world, no matter how dire times may seem in the present."—School Library Journal, starred review

"It's a chatty, funny, engaging book, one that often addresses the reader directly. It's filled with energetic cartoons... that will appeal to your little rebel, depicting teachers as dungeon-keepers, matadors and flying dragons. Patterson... knows how to structure a plot and builds in some surprising--even touching--twists.... Rafe is the bad boy with a heart of gold."—The New York Times

"The book's . . . dynamic artwork and message that 'normal is boring' should go a long way toward assuring kids who don't fit the mold that there's a place for them, too."—Publishers Weekly

Incredibly detailed and imaginative illustrations . . . add depth and humor. . . . an enjoyable story that even the most reluctant readers should enjoy."
—Library Media Connection

"There is substance as well as appeal here.... Patterson deftly manages the pace of revelations that take readers deeper into Rafe's fragile trust.... Readers ready for something else in the same vein but more substantive than Kinney's Diary of a Wimpy Kid or Peirce's Big Nate should be introduced to Rafe."—Bulletin of the Center for Children's Books