The Shadow of What Was Lost (The Licanius Trilogy #1) (Paperback) 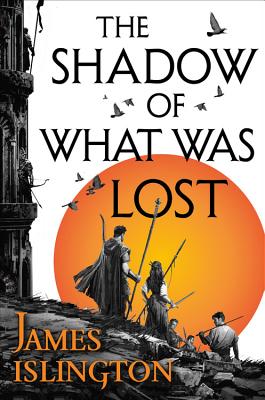 The Shadow of What Was Lost (The Licanius Trilogy #1) (Paperback)

This is book number 1 in the The Licanius Trilogy series.

A young man with forbidden magic finds himself drawn into an ancient war against a dangerous enemy in book one of the Licanius Trilogy, the series that fans are heralding as the next Wheel of Time.

As destiny calls, a journey begins.

It has been twenty years since the godlike Augurs were overthrown and killed. Now, those who once served them -- the Gifted -- are spared only because they have accepted the rebellion's Four Tenets, vastly limiting their powers.

As a Gifted, Davian suffers the consequences of a war lost before he was even born. He and others like him are despised. But when Davian discovers he wields the forbidden power of the Augurs, he and his friends Wirr and Asha set into motion a chain of events that will change everything.

To the west, a young man whose fate is intertwined with Davian's wakes up in the forest, covered in blood and with no memory of who he is. . .

And in the far north, an ancient enemy long thought defeated begins to stir.

The Licanius Trilogy is a series readers will have a hard time putting down -- a relentless coming-of-age epic from the very first page.

"Storytelling assurance rare for a debut . . . Fans of Robert Jordan and Brandon Sanderson will find much to admire."" -- Guardian
James Islington was born and raised in southern Victoria, Australia. His influences growing up were the stories of Raymond E. Feist and Robert Jordan, but it wasn't until later, when he read Brandon Sanderson's Mistborn series -- followed soon after by Patrick Rothfuss' Name of the Wind -- that he was finally inspired to sit down and write something of his own. He now lives with his wife and daughter on the Mornington Peninsula in Victoria.
"Ingeniously plotted...Islington's natural storytelling ability provides incessant plot twists and maintains a relentless pace...A promising page-turner from a poised newcomer."—Kirkus on The Shadow of What as Lost

"Islington has built a world with all the right genre elements: complex magic, terrifying threats out of legend, political intrigue, and a large cast of characters whose motivations are seldom clear. Fans of doorstop epic fantasy will not be disappointed."—Publishers Weekly on The Shadow of What Was Lost

"Love The Wheel of Time? This is about to become your new favorite series."—B&N SF & Fantasy Blog on The Shadow of What Was Lost

"Storytelling assurance rare for a debut . . . Fans of Robert Jordan and Brandon Sanderson will find much to admire."—Guardian on The Shadow of What Was Lost

The plot twists are unexpected, the world building is fascinating, and the fledgling love story is a charmer.... This sweeping and compelling epic is ripe for a sequel.—Booklist on The Shadow of What Was Lost

"Will appeal to anybody looking for a coming-of-age fantasy tale with likeable characters and strong world building."—Fantasy Faction on The Shadow of What Was Lost

"Action aplenty and an ample spattering of violence...this is a whole new world with a fresh fantasy streak."—SciFiNow on The Shadow of What Was Lost

"A relentless juggernaut of a book . . . Astoundingly intricate worldbuilding."—The Daily Mail on The Shadow of What Was Lost