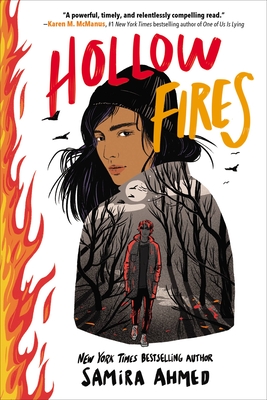 “I was immediately consumed with the power and uniqueness of this novel. A timely topic portrayed in profound writing, told from the viewpoint of a young boy who was killed and the young woman who found his body. This is truly beautiful.”
— Kappy Kling, HearthFire Books, Evergreen, CO

A powerful, gripping YA novel about the insidious nature of racism, the terrible costs of unearthing hidden truths, and the undeniable power of hope, by New York Times bestselling author Samira Ahmed. Perfect for fans of Sadie and Dear Martin.

Safiya Mirza dreams of becoming a journalist. And one thing she’s learned as editor of her school newspaper is that a journalist’s job is to find the facts and not let personal biases affect the story. But all that changes the day she finds the body of a murdered boy.

Jawad Ali was fourteen years old when he built a cosplay jetpack that a teacher mistook for a bomb. A jetpack that got him arrested, labeled a terrorist—and eventually killed. But he’s more than a dead body, and more than “Bomb Boy.” He was a person with a life worth remembering.

Driven by Jawad’s haunting voice guiding her throughout her investigation, Safiya seeks to tell the whole truth about the murdered boy and those who killed him because of their hate-based beliefs.

This gripping and powerful book uses an innovative format and lyrical prose to expose the evil that exists in front of us, and the silent complicity of the privileged who create alternative facts to bend the truth to their liking.

Samira Ahmed is the New York Times bestselling author of Love, Hate, & Other Filters; Mad, Bad, & Dangerous to Know; Internment, and Hollow Fires. She was born in Bombay, India, and has lived in New York, Chicago, and Kauai. Find her online at samiraahmed.com and on Twitter and Instagram @sam_aye_ahm.

"With Hollow Fires, Samira Ahmed offers us an impossible-to-put-down thriller that is both spectacularly haunting and deeply thoughtful. Safiya and Jawad are not narrators we usually see, and their harrowing story is a wholly original commentary on perception, community, and the way society weighs one life against another." —Sabaa Tahir #1 NYT bestselling author of An Ember in the Ashes

"The book presents a ripped-from-the-headlines story that will be an easy sell both in terms of theme and topic."—School Library Connection

"Weaving alternating perspectives with articles and other media quotes, both real and fictional, this drives an all-too-real story that educates as much as it enthralls."—Booklist

"Ahmed weaves evocative prose with images, articles, and text messages to explore with skill and depth the twining of social media in an age of misinformation, alt-right political movements, and racism and Islamophobia."—Publishers Weekly, starred review

"Ahmed offers up a twisty, thrilling mystery while deploying the details of the crime as a framework for her exploration of Islamophobia and how wealth and privilege shield criminals from suspicion. The Chicago setting and the ultimate revelations of the horrific act call up elements of the Leopold and Loeb murders... it also makes a timely whodunnit that will satisfy any reader looking for a mystery, rich in secrets and social commentary."—BCCB

"In a novel that cleverly uses time jumps; alternates narration (between Safiya and ghost Jawad); and occasionally incorporates text messages, newspaper articles, and the like, Ahmed positions her story in the larger context of a racially divided world."—Horn Book

*"Her devastating and inspiring book is at once a gripping thriller and a passionate call for change that’s urgent and timely—and sadly, also timeless."
—Book Page

"This impassioned ride toward the truth, based on a true story, will make readers think about the media bites they consume and white youth’s easy access to radicalization."—School Library Journal, starred review