An Arrow to the Moon (Hardcover) 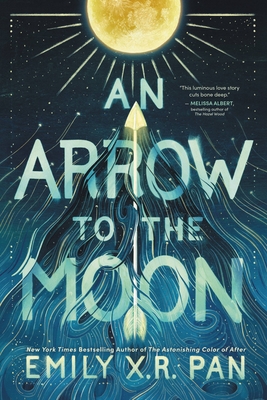 An Arrow to the Moon (Hardcover)

“In a quaint Northeastern town in the 1990s, Luna and Hunter live just a forest apart. When they meet, everything changes in a flash of light. Woven with Chinese folklore and magical realism, An Arrow to the Moon will take your breath away.”
— Mary Wahlmeier, Raven Book Store, Lawrence, KS

Romeo and Juliet meets Chinese mythology in this magical novel by the New York Times bestselling author of The Astonishing Color of After.

Hunter Yee has perfect aim with a bow and arrow, but all else in his life veers wrong. He’s sick of being haunted by his family’s past mistakes. The only things keeping him from running away are his little brother, a supernatural wind, and the bewitching girl at his new high school.

Luna Chang dreads the future. Graduation looms ahead, and her parents’ expectations are stifling. When she begins to break the rules, she finds her life upended by the strange new boy in her class, the arrival of unearthly fireflies, and an ominous crack spreading across the town of Fairbridge.

As Hunter and Luna navigate their families’ enmity and secrets, everything around them begins to fall apart. All they can depend on is their love…but time is running out, and fate will have its way.
An Arrow to the Moon, Emily X.R. Pan’s brilliant and ethereal follow-up to The Astonishing Color of After, is a story about family, love, and the magic and mystery of the moon that connects us all.
Emily X.R. Pan lives on Lenape land in Brooklyn, New York, but was originally born in the Midwestern United States to immigrant parents from Taiwan. Her debut novel, The Astonishing Color of After, was a New York Times bestseller, winner of the APALA Honor and Walter Honor awards, a finalist for the L.A. Times Book Prize, longlisted for the Carnegie Medal, and featured on over a dozen best-of-the-year lists. She received her MFA in fiction from the NYU Creative Writing Program, where she was a Goldwater Fellow and editor-in-chief of Washington Square. She was the founding editor-in-chief of Bodega Magazine, and went on to co-create the FORESHADOW platform and anthology. An Arrow to the Moon is her second novel. Visit Emily online at exrpan.com, and find her on Twitter and Instagram: @exrpan.
An IndieBound Bestseller
An NPR Best Book

*"In lush prose, Pan retells both the Chinese legend of Chang’e and Houyi and Shakespeare’s Romeo and Juliet. The seemingly ordinary setting of “1991, in Fairbridge, Where We Lay Our Scene” opens up to a world full of mystery and magic."—Horn Book, starred review

"... intricately woven tapestry of first love, intergenerational struggles, and the joys and heartaches of growing up. "—BCCB, starred review

“This story really comes alive through Emily X.R. Pan's prose. Every sentence feels imbued with an ethereal magic. The two protagonists bond as they discover their family's secrets, navigate their futures and seek to understand the mysterious forces that surround them.”—NPR's Books We Love

Praise for An Arrow to the Moon:

"An Arrow to the Moon is a beautifully crafted blend of mythology and modern love story, full of stunning prose, characters who feel achingly real, and magic lurking just behind the ordinary. One of my new favorites!"—Hannah Whitten New York Times bestselling author of For The Wolf)

"Emily X.R. Pan's brilliantly crafted, harrowing first novel portrays the vast spectrum of love and grief with heart-wrenching beauty and candor. This is a very special book."—John Green, bestselling author of The Fault in Our Stars and Turtles All the Way Down

"An extraordinary debut from a fiercely talented writer."—Nova Ren Suma, bestselling author of The Walls Around Us

"Magic and mourning, love and loss, secrets kept and secrets revealed all illuminate Emily X.R. Pan's inventive and heart-wrenching debut."—Gayle Forman, bestselling author of If I Stay and I Was Here

" ...a brilliant story that will have you lingering on every moment. Hunter and Luna will capture your heart..."—B&N Reads

"... story that glows with ethereal magic."—NPR

"A lovely, lyrical exploration of how a poignant Chinese myth might play out in a contemporary setting."

“As anyone who read The Astonishing Color of After can tell you, Emily X. R. Pan’s writing is, well, astonishing, and this story, pitched as Romeo and Juliet meets Houyi and Chang'e, solidifies that fact.” —Buzzfeed

"Like Pan’s’s debut, An Arrow to the Moon will blend romance, emotional storytelling, Chinese mythology and fantastical elements for an unforgettable combination.”—Bookpage

“A young adult novel that crafts a bittersweet narrative of love, family, and culture.”—The International Examiner

"Expansive, third-person chapters—including some from the adults’ perspectives—and snippets of lore create a contemporary telling with an otherworldly, age-old feel in this cleverly conceived novel."—Publishers Weekly

"Emily X.R. Pan beautifully depicts grief in all its complexities: the numbing sadness, the rage, the confusion, and, most hauntingly, the joy."—Bustle.com

"Through Leigh's emotional, illuminating first person narration, Emily X. R. Pan peels back the layers of her grief to expose the heart at the center. The result is a novel as lyrical as it is earnest."—Tor.com

"...intricately woven tapestry of first love, intergenerational struggles, and the joys and heartaches of growing up."—BCCB

"Emily X.R. Pan utterly transported me to a world reminiscent of Isabel Allende. Haunting at every turn, this is a glorious debut."—Renée Ahdieh, bestselling author of The Wrath and the Dawn

"This beautiful, magical journey through grief made my heart take flight."—Holly Black, bestselling author of The Cruel Prince and The Darkest Part of the Forest

"The Astonishing Color of After works a delicate magic. Its portrayal of grief is deeply felt, and so too is its deliciously tricky romance. I loved this book."—Marie Rutkoski, bestselling author of The Winner's Curse

"My heart has never been more pleasantly devastated. A raw and brilliant debut."—Roshani Chokshi, bestselling author of The Star-Touched Queen

"In this dazzling debut, author Emily X.R. Pan has created a spellbinding narrative about love, family, and what it means to grieve."—Bustle

* "Pan's emotionally charged debut is a compelling exploration of grief and the insidiousness of depression."—Publishers Weekly, starred review

* "Pan's debut novel is not to be missed."—School Library Journal, starred review

* "This novel is as elegant as it is mesmerizing."—VOYA, starred review

"An evocative novel that captures the uncertain, unmoored feeling of existing between worlds--culturally, linguistically, ethnically, romantically, and existentially--it is also about seeking hope and finding beauty even in one's darkest hours."—Kirkus Reviews

"I am sure I will return to this book every year, just as I am sure that there will always be something new for me to find in its pages."—BookRiot

"In her debut book, Pan communicates what seems many lifetimes of wisdom: the intricacies of grief, how mental illness ripples through families and what it means to find love in the midst of so much loss."—The Daily Beast

"The story is centered on a heart-wrenching mystery, yet Pan's prose is as warm and free-flowing as Waipo's oolong tea, making this story a surprisingly uplifting one."—BookPage

"This is a lush page-turner of a book that blends a straightforward teen coming-of-age and tragic family drama with the legends and stories surrounding the Chinese Ghost Month. It's an exquisite novel with an irresistible narrator and beguiling mystery. Pan has accomplished so much with The Astonishing Color of After; her writing shimmers on every single page."—Locus

"An Arrow to the Moon will blend romance, emotional storytelling, Chinese mythology and fantastical elements for an unforgettable combination.”—Bookpage