The Great Tales Of Middle-Earth: The Children of Húrin, Beren and Lúthien, and The Fall of Gondolin (Hardcover) 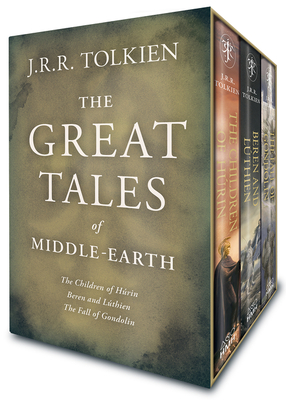 The Great Tales Of Middle-Earth: The Children of Húrin, Beren and Lúthien, and The Fall of Gondolin (Hardcover)

The Great Tales of Middle-earth is a beautiful boxed set of the three final novels of Middle-earth: Children of Húrin, Beren and Lúthien, and The Fall of Gondolin, packaged together for the first time. Completing Christopher Tolkien’s lifelong achievement as the editor and curator of his father J.R.R. Tolkien’s manuscripts, The Great Tales features handsome color plates and maps by famed illustrator Alan Lee.

The Children of Húrin was the first complete book by J.R.R.Tolkien since the 1977 publication of The Silmarillion. Six thousand years before the One Ring is destroyed, Middle-earth lies under the shadow of the Dark Lord Morgoth. The greatest warriors among elves and men have perished, and all is in darkness and despair. But a deadly new leader rises, Túrin, son of Húrin, and with his grim band of outlaws begins to turn the tide in the war for Middle-earth—awaiting the day he confronts his destiny and the deadly curse laid upon him.

Beren and Lúthien was, or became, an essential element in the evolution of The Silmarillion, the myths and legends of the First Age of the World conceived by J.R.R. Tolkien. Essential to the story, and never changed, is the fate that shadowed the love of Beren and Lúthien: for Beren was a mortal man, but Lúthien was an immortal elf. Her father, a great elvish lord, in deep opposition to Beren, imposed on him an impossible task that he must perform before he might wed Lúthien. This is the kernel of the legend; and it leads to the supremely heroic attempt of Beren and Lúthien together to rob the greatest of all evil beings, Melkor, called Morgoth, the Black Enemy, of a Silmaril.

The Fall of Gondolin completes the set and tells the story of the destruction of the legendary city of Gondolin at the hands of evil Morgoth in retaliation against Ulmo, the Lord of the Waters, who favors man. At core is the tale of Tuor, cousin of Túrin, his wife, Idril, daughter of Turgon, king of Gondolin, and their child, Eärendel, who became great in Gondolin, but had to flee the blazing wreckage of his home when Morgoth attacked.

John Ronald Reuel Tolkien (1892-1973) was a distinguished academic, though he is best known for writing The Hobbit, The Lord of the Rings, and The Silmarillion, plus other stories and essays. His books have been translated into over 60 languages and have sold many millions of copies worldwide.

ALAN LEE was born in Middlesex in 1947. His illustrated books include Faeries (with Brian Froud), Castles and Merlin Dreams, and the three ‘Great Tales’ of Middle-earth: The Children of Húrin, Beren and Lúthien, and The Fall of Gondolin. He has worked on such prestigious films as Erik the Viking (Terry Gilliam), Legend (Ridley Scott), and the acclaimed NBC miniseries Merlin. He is best known, however, for his work on the books The Hobbit and The Lord of the Rings, and now the film versions.