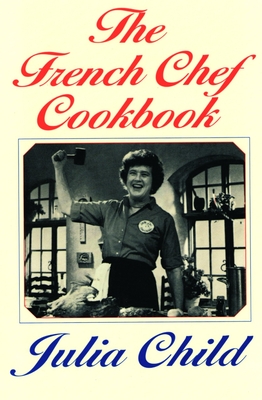 
Usually Ships in 1-5 Days
The beloved icon and author of best-selling classic Mastering the Art of French Cooking presents an array of delectable French recipes that first made her a household name.

Originally debuted on her first public television show, here are 119 traditional French recipes, tested and perfected for home cooks to enjoy—from Mayonnaise to Bouillabaisse, crepes to steaks, and delicious vegetables to delectable desserts. America’s first lady of food continues to profoundly shaped the way we cook, the way we eat, and the way we see food.
Julia Child was born in Pasadena, California. She graduated from Smith College and worked for the OSS during World War II; afterward she lived in Paris, studied at the Cordon Bleu, and taught cooking with Simone Beck and Louisette Bertholle, with whom she wrote the first volume of Mastering the Art of French Cooking (1961). In 1963, Boston’s WGBH launched The French Chef television series, which made Julia Child a national celebrity, earning her the Peabody Award in 1965 and an Emmy in 1966. Several public television shows and numerous cookbooks followed. She died in 2004.
“Julia Child paved the way for Chez Panisse and so many others by demystifying French food and by reconnecting pleasure and delight with cooking and eating at the table. She brought forth a culture of American ingredients and gave us all the confidence to cook with them in the pursuit of flavor.” —Alice Waters, Chez Panisse

“Julia is . . . the grande dame of cooking, who has touched all of our lives with her immense respect and appreciation of cuisine.” —Emeril Lagasse, Emeril’s Restaurant

“Julia has slowly but surely altered our way of thinking about food. She has taken the fear out of the term ‘haute cuisine.’ She has increased gastronomic awareness a thousandfold by stressing the importance of good foundation and technique, and she has elevated our consciousness to the refined pleasures of dining. Through the years her shows have kept me in rapt attention, and her humor has kept me in stitches. She is a national treasure, a culinary trendsetter, and a born educator beloved by all.” —Thomas Keller, The French Laundry

“Julia freed the American public from their fears of cooking French. By doing so, she greatly expanded the audience for all serious food writers. Her demystification prepared that public for the rest of us. I believe that the television shows based on that landmark book did even more to encourage reluctant cooks to try their hands . . . much to our benefit.” —Mimi Sheraton