The Waste Land and Other Writings (Modern Library Classics) (Paperback) 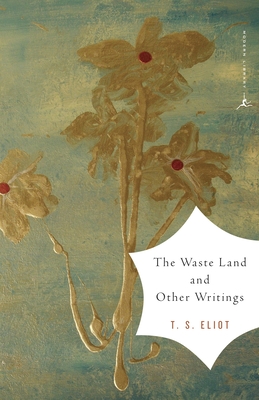 The Waste Land and Other Writings (Modern Library Classics) (Paperback)


Usually Ships in 1-5 Days
Also includes Prufrock and Other Observations, Poems (1920), and The Sacred Wood
Introduction by Mary Karr

First published in 1922, “The Waste Land,” T. S. Eliot’s masterpiece, is not only one of the key works of modernism but also one of the greatest poetic achievements of the twentieth century. A richly allusive pilgrimage of spiritual and psychological torment and redemption, Eliot’s poem exerted a revolutionary influence on his contemporaries, summoning forth a potent new poetic language. As Kenneth Rexroth wrote, Eliot “articulated the mind of an epoch in words that seemed its most natural expression.” As commanding as his verse, Eliot’s criticism also transformed twentieth-century letters, and this Modern Library edition includes a selection of Eliot’s most important essays.
Mary Karr is an award-winning poet, essayist, and memoirist. She is also the author of four books of poetry, Abacus, The Devil’s Tour, Viper Rum, and Sinners Welcome, and three memoirs, The Liar’s Club, Cherry, and Lit.