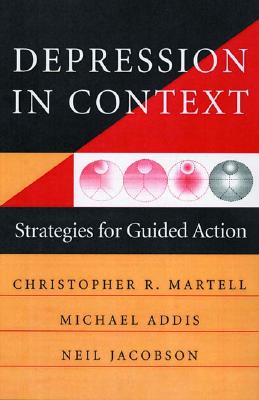 In Depression in Context, Martell, Addis, and Jacobson explain the theory behind their model, describe strategies and techniques for successful therapy, and bring the treatment to life with many clinical examples as well as two complete case illustrations.

Depression in Context will appeal to professionals and students alike. Neil Jacobson was a leader in developing and testing treatments for depression. At the time of his death, in 1999, he Christopher Martell, and Michael Addis had just begun work on this book. In fact, they had spent several years discussing behavioral approaches to treating depression and had been collaborating on one of the largest clinical trials for depression comparing behavioral activation to cognitive therapy and medication. Preliminary findings from this study suggest that treating depression by helping to activate people (behavioral action) is just as effective as helping them to change their thinking (cognitive therapy).

Neil S. Jacobson, formerly Professor of Psychology at the University of Washington, was widely recognized as a consummate scientist-practitioner and as one of the leading experts in the theory and practice of behavior therapy.

Christopher R. Martell, Ph.D., is clinical assistant professor of psychology at the University of Washington and has a private practice in Seattle.