Nonna Maria and the Case of the Missing Bride: A Novel (Hardcover) 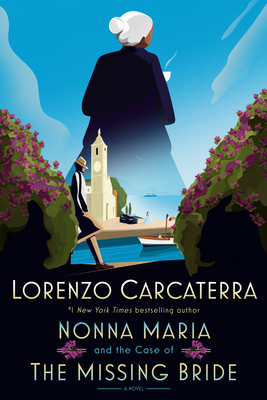 Nonna Maria and the Case of the Missing Bride: A Novel (Hardcover)


Usually Ships in 1-5 Days
When a crime on a beautiful Italian island stumps the police, locals turn to the trusted elderly widow Nonna Maria in this transporting mystery from #1 New York Times bestselling author Lorenzo Carcaterra, “one of the all-time greats” (Jeffery Deaver).

“An utterly delightful tale starring one of the most charming amateur sleuths ever created.”—Tess Gerritsen, New York Times bestselling author of Listen to Me

Nonna Maria has lived on Ischia, an island in the Gulf of Naples, her entire life. Recognizable by the widow’s black she’s worn every day for decades, she always has pasta on the stove and espresso in the pot for the neighbors who stop by to ask her advice on life and love. Everyone knows her, and she knows everyone’s business. So if something goes wrong, islanders look to her, not the local carabinieri, to find the solution.

When a recently engaged woman confesses that she’s afraid her fiancé, a stranger to Ischia with a murky past, might not be who he seems, Nonna Maria helps her disappear so she can investigate the true nature of her betrothed. The stranger has also raised the suspicions of Captain Murino of the carabinieri, but he’s occupied investigating the death of a tour boat captain who drowned in the wee hours of the morning. Captain Murino believes it was an accident, but Nonna Maria knows the man was a born sailor and too good a swimmer to drown, no matter how much wine he might have drunk. While Captain Murino has his hands full, she pours herself a glass of white wine and gets to work, even though getting involved will expose her to the dangers lurking just beneath the surface of her idyllic home.
Lorenzo Carcaterra is the #1 New York Times bestselling author of A Safe Place, Sleepers, Apaches, Gangster, Street Boys, Paradise City, Chasers, Midnight Angels, The Wolf, Tin Badges, Payback, and Three Dreamers. He is a former writer/producer for Law & Order and has written for National Geographic Traveler, The New York Times Magazine, Details, and Maxim. He lives in New York City.
“An utterly delightful tale starring one of the most charming amateur sleuths ever created, Nonna Maria and the Case of the Missing Bride is so delicious it will make you want to pack your bags and move to Italy!”—Tess Gerritsen, New York Times bestselling author of Listen to Me

“The brilliant Lorenzo Carcaterra has created his own irresistible genre: the literary cozy. I fell in love with this wonderfully lyrical and completely entertaining novel, and most of all its instantly iconic heroine. Nonna Maria is Miss Marple and Sherlock Holmes combined into one wise and unforgettable character. Touching, charming, and delightful—do not miss this!”—USA Today bestselling author Hank Phillippi Ryan

“Lorenzo Carcaterra has written a suspenseful tale while bringing the history, traditions, and colorful characters of the island of Ischia to life. The indomitable Nonna Maria shines throughout. Bravo!”—Camilla Trinchieri, author of the Doyle/Perillo Tuscan mystery series

“Nostalgia for Ischia’s simpler way of life, nearly lost in the face of the fast-paced modern world, combines successfully with a suspenseful plot and a feisty heroine who’s as kind as she is steely.”—Booklist

“One of the all-time greats.”—Jeffery Deaver, #1 internationally bestselling author of the Lincoln Rhyme series

“One of my favorite writers in the world.”—Lisa Scottoline, New York Times bestselling author of Someone Knows

“A writer who has earned his spot at the top echelon of suspense masters . . . Lorenzo Carcaterra is simply the best.”—Steve Berry, New York Times bestselling author of the Cotton Malone series