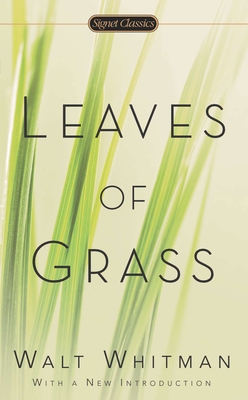 
Usually Ships in 1-5 Days
Ralph Waldo Emerson issued a call for a great poet to capture and immortalize the unique American experience. In 1855, an answer came with Walt Whitman’s Leaves of Grass.

Today, this masterful collection remains not only a seminal event in American literature but also the incomparable achievement of one of America’s greatest poets—an exuberant, passionate man who loved his country and wrote of it as no other has ever done. Walt Whitman was a singer, thinker, visionary, and citizen extraordinaire. Thoreau called Whitman “probably the greatest democrat that ever lived,” and Emerson judged Leaves of Grass as “the most extraordinary piece of wit and wisdom America has yet contributed.”

The text presented here is that of the “Deathbed” or ninth edition of Leaves of Grass, published in 1892. The content and grouping of poems is the version authorized by Whitman himself for the final and complete edition of his masterpiece.
In 1855, Walt Whitman (1819–92) published his great tribute to America, the volume of poems that was to become his masterpiece, Leaves of Grass. Although praised by Emerson, the work met with a disappointing reception, and Whitman went on to become a war correspondent and government clerk, devoting much of his time to caring for the sick and wounded in hospitals around Washington. His reactions to and interpretations of the struggle for freedom are to be found in Drum-Taps and the Civil War section of Specimen Days.

Billy Collins has published nine volumes of poetry, most recently Horoscopes of the Dead. He is also the editor of Poetry 180: A Turning Back to Poetry.  He served as United States poet laureate from 2001 to 2003 and was New York State poet laureate from 2004 to 2006.  He is a Distinguished Professor of English at Lehman College (CUNY) and the Senior Distinguished Fellow of the Winter Park Institute in Florida.

Peter Davison was the author of ten books of verse, culminating in The Poems of Peter Davison, 1957–1995, before his eleventh and final collection, Breathing Room. Davison also wrote a memoir, Half Remembered: A Personal History; a book of criticism, One of the Dangerous Trades: Essays on the Work and Workings of Poetry; and a literary chronicle, The Fading Smile: Poets in Boston from Robert Frost to Robert Lowell to Sylvia Plath, 1955–1960. He was also poetry editor of The Atlantic Monthly.

Elisabeth Panttaja Brink teaches writing in the Woods College of Advancing Studies at Boston College.  She has a PhD in American Literature and is the author of scholarly essays, short stories, and two novels, Save Your Own and (as Elisabeth Elo) North of Boston.
“Whitman's best poems have that permanent quality of being freshly painted, of not being dulled by the varnish of the years.”—Malcolm Cowley