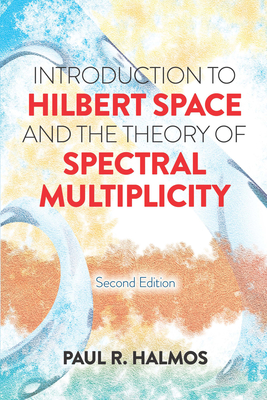 
Special Order
This concise introductory treatment consists of three chapters: The Geometry of Hilbert Space, The Algebra of Operators, and The Analysis of Spectral Measures. Author Paul R. Halmos notes in the Preface that his motivation in writing this text was to make available to a wider audience the results of the third chapter, the so-called multiplicity theory. The theory as he presents it deals with arbitrary spectral measures, including the multiplicity theory of normal operators on a not necessarily separable Hilbert space. His explication covers, as another useful special case, the multiplicity theory of unitary representations of locally compact abelian groups.
Suitable for advanced undergraduates and graduate students in mathematics, this volume's sole prerequisite is a background in measure theory. The distinguished mathematician E. R. Lorch praised the book in the Bulletin of the American Mathematical Society as "an exposition which is always fresh, proofs which are sophisticated, and a choice of subject matter which is certainly timely."

Hungarian-born Paul R. Halmos (1916-2006) is widely regarded as a top-notch expositor of mathematics. He taught at the University of Chicago and the University of Michigan as well as other universities and made significant contributions to several areas of mathematics, including mathematical logic, probability theory, ergodic theory, and functional analysis.