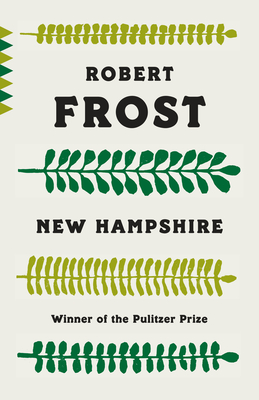 
Usually Ships in 1-5 Days
A Vintage Classics edition of Frost's 1923 collection of poems that won the Pulitzer Prize and contains some of his most famous and beloved poems. Includes the original woodcut illustrations, not in print elsewhere.

Robert Frost won the first of his four Pulitzer Prizes with this collection, published in 1923. It contains some of his most enduring and best-known poems, including "Nothing Gold Can Stay," "Fire and Ice," "The Need of Being Versed in Country Things," and "Stopping by Woods on a Snowy Evening." Included in this edition are the original woodcut illustrations of rural scenes, done in the Arts and Crafts style by J. J. Lankes.
ROBERT FROST (1874-1963) is widely regarded as one of America's finest poets. He was born in San Francisco, and when he was ten his father died and he and his mother moved to New England. He attended school at Dartmouth and Harvard, worked in a mill, taught, and took up farming, before moving to England, where his first book of poetry was published in 1913. In 1915 he returned to the United States and settled on a farm in New Hampshire. Frost was awarded the Pulitzer Prize for Poetry on four occasions and served as Consultant in Poetry at the Library of Congress.