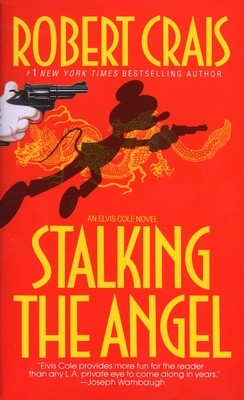 This is book number 2 in the An Elvis Cole and Joe Pike Novel series.

Meet Elvis Cole, L.A. private eye . . . he quotes Jiminy Cricket and carries a .38. He’s a literate, wisecreacking Vietnam vet who is determined never to grow up.

The blonde who walked into Cole’s office was the bestlooking woman he’d seen in weeks. The only thing that kept her from rating a perfect “10” was the briefcase on one arm and the uptight hotel magnate on the other. Bradley Warren had lost something very valuable—something that belonged to someone else: a rare thirteenth-century Japanese manuscript called the Hagakure.

Just about all Cole knew about Japanese culture he’d learned from reading Shogun, but he knew a lot about crooks—and what he didn’t know his sociopathic sidekick, Joe Pike, did. Together their search begins in L.A.’s Little Tokyo and the nest of notorious Japanese mafia, the yakuza, and leads to a white-knuckled adventure filled with madness, murder, sexual obsession, and a stunning double-whammy ending. For Elvis Cole, it’s just another day’s work.

Praise for Stalking the Angel

“Out on the West Coast, where private eyes thrive like avocado trees, Robert Crais has created an interesting and amusing hero in Elvis Cole.”—The Wall Street Journal

“Devotees of the rock ‘em, sock ‘em school should find [Stalking the Angel] tasty.”—The San Diego Union
Robert Crais is the #1 New York Times bestselling author of more than twenty novels, many of them featuring private investigator Elvis Cole and his laconic ex-cop partner, Joe Pike. Before writing his first novel, Crais spent several years writing scripts for such major television series as Hill Street Blues, Cagney & Lacey, Miami Vice, Quincy, Baretta, and L.A. Law. He received an Emmy nomination for his work on Hill Street Blues, and one of his standalone novels, Hostage, was made into a movie starring Bruce Willis. His novels have been translated into forty-two languages and are bestsellers around the world. A native of Louisiana, he lives in Los Angeles.
“Stalking the Angel is a righteous California book: intelligent, perceptive, hard, clean.”—James Ellroy

“Out on the West Coast, where private eyes thrive like avocado trees, Robert Crais has created an interesting and amusing hero in Elvis Cole . . . definitely new.”—The Wall Street Journal

“Robert Crais is one of the rising young stars of the private eye genre . . . Devottees of the rock ‘em, sock ‘em school should find [Stalking the Angel] tasty.”—The San Diego Union