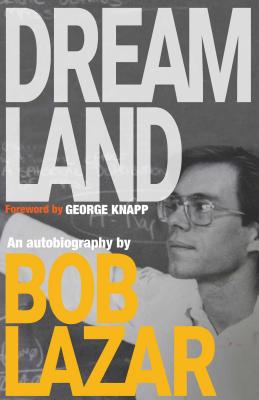 
Usually Ships in 1-5 Days
Bob Lazar is the reason Area 51 became infamous in the 1980s and his recent appearance on Joe Rogan's podcast with 7 million listeners is credited with inspiring the Storm Area 51 phenomenon.  In his DREAMLAND autobiography, Lazar reveals every detail of his highly controversial story about being an insider within the world's most legendary military research base.

Bob Lazar was a brilliant young physicist that found himself employed at a top secret facility in the middle of the desert outside Las Vegas. Under the watchful eye of the government elite, he is tasked with understanding an exotic propulsion system being used by an advanced aerospace vehicle he is told came from outer space.

The stressful work and long, odd hours start to wear on Bob and he becomes concerned for his safety. He tells his wife and a couple close friends about what he's doing in the desert, and his employers find out and are furious. When they station goons outside his house, Bob seeks help from wealthy UFOlogist, John Lear, who encourages Bob to take his story to award-winning investigative journalist George Knapp at KLAS-TV, a CBS affiliate.

To prove he's telling the truth, Bob takes a group of people out into the desert to watch a test flight of the "flying saucer." On the way home, they are stopped by the police, who notify the base, and Bob loses his job. In a series of interviews with CBS TV, Bob Lazar then blows the lid off "Area 51," blows the whistle on the effort to conceal this craft from the American people, and blows up his career as a top physicist.

Bob Lazar's reports have been the subject of intense controversy for decades. He has been interviewed numerous times and his story has been corroborated by other individuals he worked with and who were present when these events happened. But until now, Bob Lazar has never told his own story, in every detail in his own words, about those exciting days in the desert outside of Las Vegas and how the world came to learn about the experiments being conducted at Area 51.
George Knapp is an American television investigative journalist, news anchor, and talk radio host on Coast-Coast AM. Since 1995, George has been the chief reporter on Channel 8's I-Team investigative unit. In that capacity, he has earned five regional Edward R. Murrow awards and two national Edward R. Murrow award for his investigative stories, and is a nine-time winner of the Associated Press Mark Twain Award for best Newswriting. His investigative reports have been recognized awarded the highest honors in broadcast journalism, including the DuPont Award from Columbia University and the Peabody Award (twice). He has also won 24 regional Emmys. In 1990 his series about UFOs was selected by United Press International as best in the nation for Individual Achievement by a Journalist.