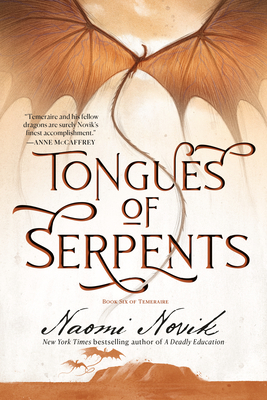 This is book number 6 in the Temeraire series.

From the New York Times bestselling author of A Deadly Education comes the sixth volume of the Temeraire series, as Will Laurence and Temeraire are exiled to Australia in the ever expanding war between Napoleon and Britain.

“Temeraire and his fellow dragons are surely Novik’s finest accomplishment.”—BookPage

Convicted of treason despite their heroic defense against Napoleon’s invasion of England, Temeraire and Captain Will Laurence have been transported to a prison colony in distant Australia—and into a hornet’s nest of fresh complications. The colony is in turmoil after the overthrow of military governor William Bligh—aka Captain Bligh, late of HMS Bounty. And when Bligh tries to enlist them in his bid to regain office, the dragon and his captain are caught in the middle of a political power struggle. Their only chance to escape the fray is accepting a mission to blaze a route through the forbidding Blue Mountains and into the interior of Australia.

But the theft of a precious dragon egg turns their expedition into a desperate recovery operation—leading to a shocking discovery and a dangerous new complication in the global war between Britain and Napoleon.

Don’t miss any of Naomi Novik’s magical Temeraire series
HIS MAJESTY’S DRAGON • THRONE OF JADE • BLACK POWDER WAR • EMPIRE OF IVORY • VICTORY OF EAGLES • TONGUES OF SERPENTS • CRUCIBLE OF GOLD • BLOOD OF TYRANTS • LEAGUE OF DRAGONS
Naomi Novik is the New York Times bestselling author of A Deadly Education, The Last Graduate, and The Golden Enclaves, the award-winning novels Uprooted and Spinning Silver, and the Temeraire series. She is a founder of the Organization for Transformative Works and the Archive of Our Own. She lives in New York City with her family and six computers.

Praise for His Majesty’s Dragon and the Temeraire series