Beowulf: A Tale of Blood, Heat, and Ashes (Hardcover) 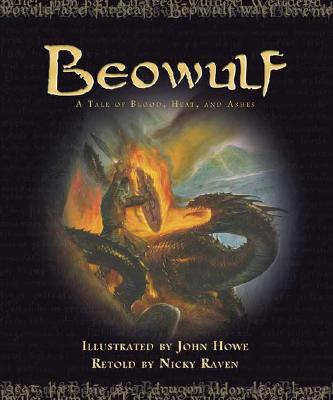 Beowulf: A Tale of Blood, Heat, and Ashes (Hardcover)


Email or call for price
The exhilarating epic blazes to life featuring illustrations by a lead artist on the LORD OF THE RINGS film trilogy.
"Look into the flames and let your minds empty. . . . For this is a tale of blood and heat and ashes."
It is a tale that has been retold countless times through the centuries and here, in an enthralling edition illustrated by a noted Tolkien artist, the mighty Beowulf is well set to capture new legions of followers. This contemporary retelling of the ancient epic narrated with a touch of banter by the faithful Wiglaf and featuring vividly dramatic illustrations follows the mythic hero from his disarming of the gruesome Grendel to his sword battle with the monster's sea hag mother to his final, fiery showdown with an avenging dragon.
John Howe is best known for his work as a lead artist on Peter s Jackson s LORD OF THE RINGS movie trilogy based on the writings of J. R. R. Tolkien. The illustrator of many books in the fantasy genre, he lives in Switzerland."