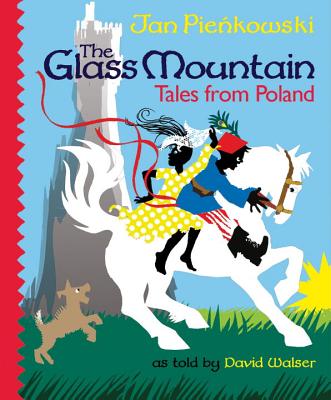 Dragons and kings, frogs and spells, witches and mermaids — all the hallmark characters of traditional Polish fairy tales are found in this magical collection. Jan Pienkowski draws on a distinctive cut-paper technique learned as a child in Poland to produce dramatic and vibrant illustrations for eight time-honored stories. Celebrating honesty, loyalty, and creativity, stories such as “The Krakow Dragon” and “The Warsaw Mermaid” will captivate today’s child as much as they did young Jan during his childhood. A pronunciation guide assists the reader with Polish place and character names.
David Walser was born in 1937 in Singapore, where his father was serving in the R.A.F. Trapped in Indo-China by the outbreak of World War II, David Walser and his mother made a perilous escape back to England. He is a writer, translator, artist, and musician, and has collaborated with Jan Pie´nkowski on eleven books. He lives in London.

Jan Pienkowski was born in Poland in 1936. When his family heard the sound of approaching guns that marked the coming of World War II, they headed for Warsaw, the first step in an odyssey that took them to Bavaria, on to Italy, and finally, to England. Jan Pienkowski is a two-time winner of the Kate Greenaway Medal and lives in London.
The Pienkowski-Walser team exuberantly present eight dramatic Polish folktales featuring the violence, evil, and heroism characteristic of the genre. The stories are well told and paced, as heroes and villains face death, transmutation, and the devil. ... The text is enhanced by the attractive illustrations, rendered in cut-paper collage and mixed media. The use of black silhouettes with bright colors on mostly white backgrounds lets the images pop. ... A solid addition to libraries where folktale collections circulate well.
—School Library Journal

A satisfying retelling of eight Polish tales, paired with bold multicolor paper cuttings that employ traditional and modern motifs. ... The stories are lively and accessible... The sometimes-whimsical illustrations use silhouettes and collage and exhibit a range of clothing styles. The animals, both real and mythical, are especially effective.
—Kirkus Reviews

The strong colors and shiny feel of the book are rather striking; even more so are Jan Pienkowski's high-contrast paper cutout illustrations, which derive from Polish folk art but which, in these pages, emit an almost African vibe. The tales vary in length and strength, as folk tales do, but together offer a dramatic glimpse into the Polish storytelling tradition.
—Wall Street Journal