The Wit and Wisdom of Mark Twain (Hardcover) 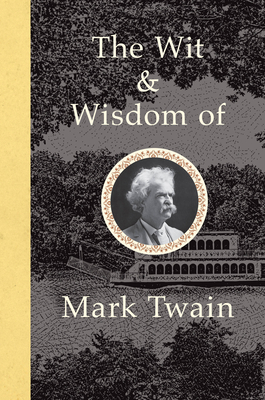 The Wit and Wisdom of Mark Twain (Hardcover)


Usually Ships in 1-5 Days
Besides being one of the most treasured writers in American history, Mark Twain was also one of the most quotable. This comprehensive compendium collects over 500 of his best quips and remarks.

Born in Missouri under the name Samuel Langhorne Clemens, his pen name, Mark Twain, was river-boat slang for 12 feet of water. Clemens adopted the name Mark Twain after he established his voice as a journalist. Under Mark Twain he wrote the classic fiction satire novels The Adventures of Tom Sawyer and Huckleberry Finn on the nature of slavery and racism at the time.

Mark Twain’s social commentary was as friendly as it was poignant. This treasury contains his witticisms about the: Following a short biography and timeline of his life, the quotes include such wisdom as:

“When a person cannot deceive himself the chances are against his being able to deceive other people.”—Mark Twain’s Autobiography

“One of the striking differences between a cat and a lie is that a cat has only nine lives.” —Pudd’nhead Wilson

“The best way to cheer yourself up is to try to cheer somebody else up.” —Mark Twain’s Notebook

“It is better to deserve honors and not have them than to have them and not deserve them.” —Mark Twain’s Notebook

“What is human life? The first third a good time; the rest remembering about it.” —More Maxims of Mark

Friendly and funny, deflating egos and lifting spirits, these quotes deserve a treasured spot in every personal library.

Mark Twain (1835–1910) grew up in Hannibal Missouri. He began his career as a journeyman printer and journalist. His youthful experiences along the Mississippi inspired some of his most famous works—and The Adventures of Huckleberry Finn. In addition to his well-known works of fiction, he was also a prolific travel writer. Among his best-known works is Life on the Mississippi. He was also a star of the lecture circuit.

Jennifer Boudinot is a freelance writer with a degree in Writing, Literature, and Publishing from Emerson College. A longtime nonfiction editor of books like Ballparks: A Journey Through the Fields of the Past, Present, and Future, she’s also the author of several cookbooks and has worked as a copywriter for such brands as Google, Mailchimp, and the Tony Awards. A licensed New York tour guide, she lives in Brooklyn and writes about the history of her neighborhood at FlatbushHistory.com.