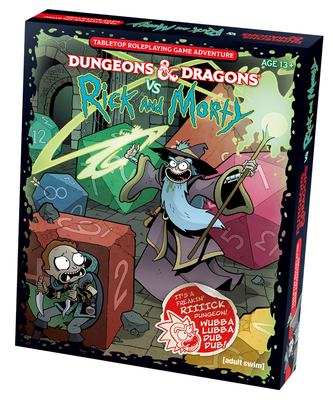 • A great companion to the comic book series, and a perfect gift for the Rick and Morty/D&D fan in your life.
The leader in providing contemporary fantasy entertainment, Dungeons & Dragons is the wellspring for the entire modern game industry, digital as well as tabletop. Fifth edition D&D draws from every prior edition to create a universally compelling play experience, and exemplifies the true spirit of a game that holds captive the hearts and minds of millions of players worldwide.

Jim Zub is a writer, artist and art instructor based in Toronto, Canada. Over the past seventeen years he’s worked for a diverse array of publishing, movie and video game clients including Marvel, DC Comics, Disney, Capcom, Hasbro, Cartoon Network, and Bandai-Namco. He juggles his time between being a freelance comic writer and Program Coordinator for Seneca College‘s award-winning Animation program.  His current comic projects include Avengers: No Road Home, a weekly epic event for Marvel’s Mightiest Heroes, Champions, Marvel’s team of teen superheroes fighting for the future, Dungeons & Dragons, the official comic series of the world’s most popular tabletop role-playing game, and Wayward, a modern supernatural story about teens fighting Japanese mythological monsters.