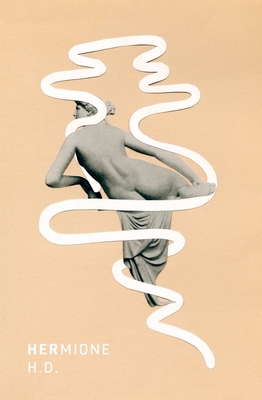 This autobiographical novel by the Imagist poet H. D. (1886–1961) is a rare and hallucinatory treasure. In writing HERmione, H. D. returned to a year in her life that was “peculiarly blighted.” She was in her early twenties—“a disappointment to her father, an odd duckling to her mother, an importunate, overgrown, unincarnated entity that had no place.” She had failed at Bryn Mawr, she felt hemmed in by her family, and she did not yet know what she was going to do with her life. The return from Europe of the wild-haired George Lowndes (Ezra Pound) expanded her horizons but threatened her sense of self. An intense new friendship with Fayne Rabb (Frances Josepha Gregg), an odd girl, brought an atmosphere that made our heroine’s hold on everyday reality more tenuous. As Francesca Wade writes in her new introduction, “HERmione is H. D.’s rejoinder to mythic authority: her portrait of an artist groping her way slowly towards self-expression ends with her sexuality and artistic powers awoken, ready to name herself so all the world might know who she is.”

A feminist icon as well as a major twentieth-century poet, H. D. (the pen name of Hilda Doolittle, 1886–1961) wrote several volumes of poetry, fiction, and nonfiction and was an exquisite translator of classical Greek drama.

Francesca Wade is the author of Square Haunting (2020), a group biography of modernist poet H. D., detective novelist Dorothy L. Sayers, classicist Jane Harrison, economic historian Eileen Power, and author and publisher Virginia Woolf.
She showed a way to penetrate mystery; which means, not to flood the darkness with light so that darkness is destroyed, but to enter into darkness, mystery, so that it is experienced.
— Denise Levertov

The work of an imagination that incorporates boldly the modern consciousness and aesthetic and the traditional, psychoanalytic realism and hermetic visionary experience of a passionate life in its old age.
— Robert Duncan

H.D. renders the past with hallucinogenic distortion, in pulsing poetic prose. This is a coming-of-age narrative told at a slant, in which people harden into marble statues, and curtains extend for miles in blue diagonals.
— Charlie Tyson - The New Yorker

In some ways, HERmione can be seen as an author’s attempt to rewrite her own genesis, to make her development as a poet a more important story than a christening over tea at the British Museum.

HERmione’s retrospective scavenging and rummaging is a masterpiece...we see an unusually unguarded and even lushly romantic side of H.D., as well as a sense of immediacy and presence in space characteristic of her early poetry. This reprint is a gem for H.D. enthusiasts, but it’s also just a pleasure to read, one of the most inviting and, in the author’s mercy for her younger proxy, most generous of her prose works.

As Francesca Wade writes in her excellent afterword, included in New Directions’ recent reissue, the novel, as a piece of early autofiction, is H.D.’s “reckoning,” her search for “a voice” as she rails against the labels and strictures of a world that fails to understand her. I am not an imagist, nor wife, nor daughter, nor muse, HERmione asserts. I am only myself, however mutable or imperfect that self may be.

Having HERmione back in print makes it possible, therefore, to better read (and teach, and grasp) modernist, lesbian and coming-of-age literature....The 2022 edition retains [H.D.'s] foreword, but brings it into conversation with a compelling afterword by Francesca Wade, who refocuses the text on H. D. and allows the author to speak for herself.

H.D.’s work at its best has the peculiar power of evanescing the contingent into something shimmering, a ‘continual allegory’ in Keats’s sense, both immanent and renewable. Hers is a poetry close to ritual invocation, resistant to the one-damn-thing-after-another offered by conventional biography. As Susan Howe wrote, in a tribute to H.D. on the centennial of her birth, ‘ecstasy is outside time.'
— Maureen McLane - LRB