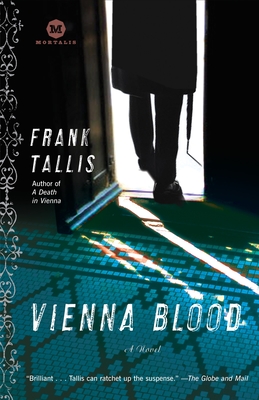 This is book number 2 in the Max Liebermann series.

In the grip of a Siberian winter in 1902, a serial killer in Vienna embarks upon a bizarre campaign of murder. Vicious mutilation, a penchant for arcane symbols, and a seemingly random choice of victim are his most distinctive peculiarities. Detective Inspector Oskar Rheinhardt summons a young disciple of Freud - his friend Dr. Max Liebermann — to assist him with the case. The investigation draws them into the sphere of Vienna’s secret societies — a murky underworld of German literary scholars, race theorists, and scientists inspired by the new evolutionary theories coming out of England. At first, the killer’s mind seems impenetrable — his behaviour and cryptic clues impervious to psychoanalytic interpretation; however, gradually, it becomes apparent that an extraordinary and shocking rationale underlies his actions. . . .

Against this backdrop of mystery and terror, Liebermann struggles with his own demons. The treatment of a patient suffering from paranoia erotica (a delusion of love) and his own fascination with the enigmatic Englishwoman Amelia Lydgate raises doubts concerning the propriety of his imminent marriage. To resolve the dilemma, he must entertain the unthinkable — risking opprobrium and accusations of cowardice.
Frank Tallis is a writer and practicing clinical psychologist. He has published seven non-fiction works (including Changing Minds: The History of Psychotherapy as an Answer to Human Suffering; and Hidden Minds: A History of the Unconscious.) His new novel, Lovesick, is also published by Century.
Praise for Mortal Mischief:
“An intriguing, impressive achievement — puts the psychological back into crime and written by a real expert.”
–Oliver James

“Smart detection and a mouthwatering view of Viennese cafe society . . . good prospects for the Liebermann series, of which this is book number one.”
–Literary Review