The Ballad of the White Horse (Hardcover) 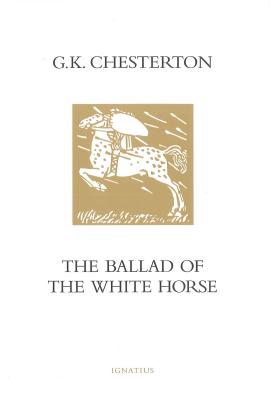 The Ballad of the White Horse (Hardcover)

The Ballad of the White Horse is one of the last great epic poems in the English language. On the one hand it describes King Alfred’s battle against the Danes in 878. On the other hand it is a timeless allegory about the ongoing battle between Christianity and the forces of nihilistic heathenism. Filled with colorful characters, thrilling battles and mystical visions, it is as lively as it is profound.

Chesterton incorporates brilliant imagination, atmosphere, moral concern, chronological continuity, wisdom and fancy. He makes his stanzas reverberate with sound, and hurries his readers into the heart of the battle.

This deluxe volume is the definitive edition of the poem. It exactly reproduces the 1928 edition with Robert Austin’s beautiful woodcuts, and includes a thorough introduction and wonderful endnotes by Sister Bernadette Sheridan, from her 60 years researching the poem. Illustrated.

G. K. Chesterton was one of the most beloved and prolific authors of the twentieth century. He wrote dozens of popular books on a variety of topics and thousands of essays. His works include Orthodoxy, The Everlasting Man, The Man Who Was Thursday, and the Father Brown mystery stories.