Know Thy Gamer: A Parent’s Guide to Video Games (Paperback) 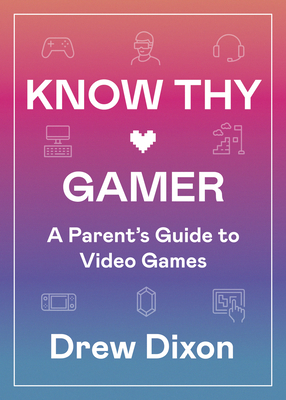 Know Thy Gamer: A Parent’s Guide to Video Games (Paperback)


Usually Ships in 1-5 Days
Between social media platforms, the videos kids watch online, or the television shows they can now stream from anywhere at any time, keeping up with what our kids are doing has become more difficult than ever. Still, there has not been an influence quite like the video gaming world. For a time, video games were as simple as a blue hedgehog running from one side of the screen to the other. Now, video games create grand adventures of secret societies, alien races that have come to destroy entire galaxies, or dark forces that have arrived to destroy ancient kingdoms.

Video games can display wondrous environments but can also house blood and gore. They can create adventures that get kids through rainy days but can also trap them in their rooms for untold amounts of time. This leaves many parents with one of two choices. They can either ignore the problems, or they can simply not allow their children to play games at all.

Drew Dixon, co-founder of Love Thy Nerd, a ministry that exists to be the love of Jesus to nerds and nerd culture, offers a better way. Let’s face it: the digital age has changed the way we parent. So, instead of ignoring what your children are playing or removing the games altogether, Know Thy Gamer offers an opportunity for parents to understand their children and the kinds of games they are playing. By discussing some of the most important movements in the gaming world, Drew guides parents to understanding and loving their gamers through a Christian lens.

Drew Dixon is the Team Leader for Student Ongoing Bible Studies at Lifeway Christian Resources in Nashville, TN. Three years ago, he co-founded Love Thy Nerd, a ministry dedicated to showing the love of Jesus to nerds and nerd culture. Drew has been speaking and writing about video games for over a decade. He has written for Christianity Today, Relevant Magazine, World Magazine, Christ and Pop Culture, Think Christian, and the Christian Research Journal. Drew travels to gaming and nerd conventions all over the country to share the love of Jesus. Drew has been married for thirteen years and has three children. He and his wife live in the Nashville area where they love hiking, biking, and playing board games.