Wheel of Time Premium Boxed Set I: Books 1-3 (The Eye of the World, The Great Hunt, The Dragon Reborn) (Multiple copy pack) 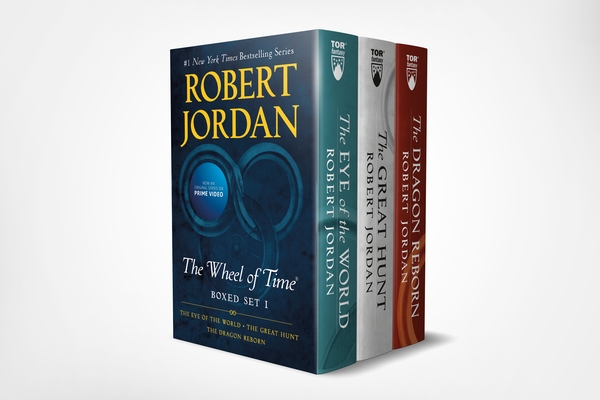 Wheel of Time Premium Boxed Set I: Books 1-3 (The Eye of the World, The Great Hunt, The Dragon Reborn) (Multiple copy pack)

The Wheel of Time is now an original series on Prime Video, starring Rosamund Pike as Moiraine!

Robert Jordan's #1 New York Times bestselling epic fantasy series, The Wheel of Time®, follows Moiraine Damodred as she arrives in Emond's Field on a quest to find the one prophesized to stand against The Dark One.

When a vicious band of half-men, half beasts invade the Two Rivers seeking their master’s enemy, Moiraine persuades Rand al’Thor and his friends to leave their home and enter a larger unimaginable world filled with dangers waiting in the shadows and in the light.

Since its debut in 1990, The Wheel of Time by Robert Jordan has captivated millions of readers around the globe with its scope, originality, and compelling characters.

The Wheel of Time Premium Boxed Set I contains:
Book One: The Eye of the World
Book Two: The Great Hunt
Book Three: The Dragon Reborn

By Robert Jordan and Amy Romanczuk
Patterns of the Wheel: Coloring Art Based on Robert Jordan's The Wheel of Time

ROBERT JORDAN (1948-2007) is best known for his internationally bestselling epic fantasy series The Wheel of Time®, which has sold over 40 million copies in North America and is currently being adapted for the screen. A native of Charleston, Jordan graduated from The Citadel, the Military College of South Carolina, with a degree in physics. He served two tours in Vietnam with the U.S. Army and received multiple decorations for his service.