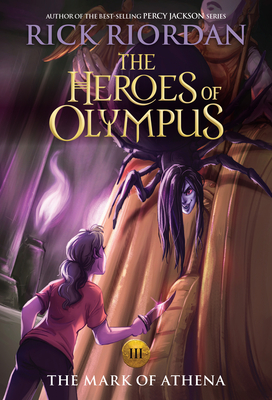 This is book number 3 in the The Heroes of Olympus series.

The third book in the mega-bestselling Heroes of Olympus series by Rick Riordan, now with fresh and exciting new cover art by graphic novelist Nilah Magruder.
In The Son of Neptune, Percy, Hazel, and Frank met in Camp Jupiter, the Roman equivalent of Camp Halfblood, and traveled to the land beyond the gods to complete a dangerous quest. The third book in the Heroes of Olympus series will unite them with Jason, Piper, and Leo. But they number only six--who will complete the Prophecy of Seven?
The Greek and Roman demigods will have to cooperate in order to defeat the giants released by the Earth Mother, Gaea. Then they will have to sail together to the ancient land to find the Doors of Death. What exactly are the Doors of Death? Much of the prophecy remains a mystery. . . .With old friends and new friends joining forces, a marvelous ship, fearsome foes, and an exotic setting, The Mark of Athena is another unforgettable adventure by master storyteller Rick Riordan.
The accessible and dramatic cover art by graphic novelist Nilah Magruder will attract a new generation of fans.

Rick Riordan, dubbed “storyteller of the gods” by Publishers Weekly, is the author of five #1 New York Times best-selling middle grade series with millions of copies sold throughout the world: Percy Jackson and the Olympians, The Heroes of Olympus, and the Trials of Apollo, based on Greek and Roman mythology; the Kane Chronicles, based on Ancient Egyptian mythology; and Magnus Chase and the Gods of Asgard, based on Norse mythology. Rick collaborated with illustrator John Rocco on two #1 New York Times best-selling collections of Greek myths for the whole family: Percy Jackson’s Greek Gods and Percy Jackson’s Greek Heroes. Rick is also the publisher of an imprint at Disney-Hyperion, Rick Riordan Presents, dedicated to finding other authors of highly entertaining fiction based on world cultures and mythologies. He lives in Boston, Massachusetts with his wife and two sons. Follow him on Twitter at @camphalfblood.


Nilah Magruder is a writer and artist based in Los Angeles, California. From her early days she developed an eternal love for three things: nature, books, and animation. She has written and storyboarded for studios such as Disney and DreamWorks. She also illustrates children's books, including the Dactyl Hill Squad series by Daniel Jose Older. Nilah is the author-illustrator of M.L.K., a middle grade graphic novel that won the Dwayne McDuffie Award for Diversity, and How to Find a Fox, a picture book. She has published short fiction in the anthology All Out, in Fireside magazine, and for Marvel Comics. When she's not working, Nilah is watching movies, growing herbs, roller-skating, and fighting her cat for control of her desk chair. Follow her on Twitter at @nilaffle.
"With a true storyteller’s sense of pacing, Riordan creates another compelling adventure, right down to the cliff-hanger at the end. Stay tuned for volume four."—Booklist