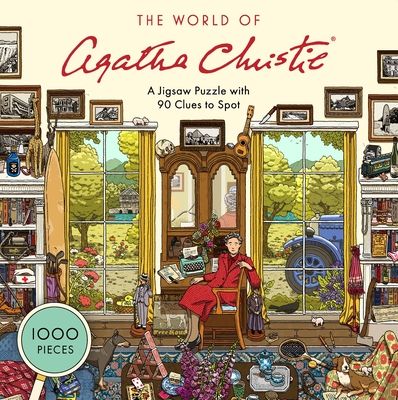 SPOT FAMOUS CHARACTERS, crime-solving clues, and historical locations as you build the puzzle. Track down Agatha Christie's most memorable characters, from Poirot and Miss Marple to Tommy & Tuppence and Parker Pyne, as well as real moments from Agatha Christie's life

Follow the trail of murder and mystery set by the Queen of Crime! Travel down the Nile, on the Orient Express and into the drawing rooms of English country homes, hot on the heels of Poirot, Miss Marple and other famous characters, as you piece together this detailed jigsaw featuring Agatha Christie and her real-life inspiration. Includes a fold-out poster highlighting 60 baffling and brilliant characters and clues that together make up The World of Agatha Christie.
Agatha Christie Limited (ACL) has been managing the literary and media rights to Agatha Christie's works around the world since 1955, when the company was set up by Christie herself. It is now chaired and managed by Agatha Christie's great grandson James Prichard.

Ilya Milstein is a graphic artist who was born in Milan, raised in Melbourne, and presently lives and works in New York. In 2018 he was a winner of ADC Young Guns.