Nailed It!: Baking Challenges for the Rest of Us (Hardcover) 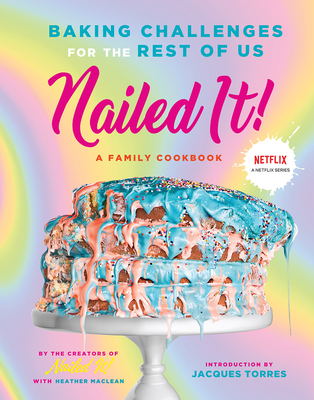 Nailed It!: Baking Challenges for the Rest of Us (Hardcover)

By Nailed It!, Jacques Torres (Introduction by)


Usually Ships in 1-5 Days
“With this book, our fans can finally experience a taste of what it’s like to be part of Nailed It! too.” —Nicole Byer

The hilarious, family-friendly official cookbook of the hit Netflix show Nailed It!, attempting the best in baking and celebrating the failures along the way

In this official companion cookbook, the creators of Nailed It! share the tips, tricks, and detailed recipes behind the incredible cakes and baked goods from your favorite episodes, as well as simplified versions of some memorable challenges to give even the most inexperienced baker a fighting chance. With recipes ranging from stress-free cookies and cupcakes you can whip up with ease to the most intimidating cakes ever revealed behind Door #2, this book contains everything you need to put your skills to the test—and have an absolute blast along with way, whether your creation is a mouthwatering masterpiece or a delicious disaster.

Inside, you’ll also find tips for hosting your own Nailed It! challenge, an Introduction and tricks of the trade from head judge Jacques Torres, exclusive interviews with some of our incredible celebrity guest judges, and odes to iconic host Nicole Byer. With this book, bakers of every age and every skill level can come together and get their hands (and their kitchens) dirty, and with hilarious stories from behind the scenes and throwbacks to the show's most noteworthy baking disasters, it's also a must-have companion for every fan.

In Netflix's Emmy-nominated baking series Nailed It!, home bakers with a terrible track record take a crack at recreating edible masterpieces for a $10,000 prize. It's part-reality contest, part-hot mess. Starring comedian Nicole Byer and renowned pastry chef Jacques Torres, Nailed It! has released four regular seasons and two special holiday seasons to universal acclaim and earned itself an adoring fanbase of all ages. Season five was filmed in fall 2020 for a 2021 release.
“What makes this show great is the lovely people who work behind the scenes to make it happen, the contestants, and last but most important Jacques Torres, who’s truly a person I adore and a dream to work with. With this book, our fans can finally experience a taste of what it’s like to be part of Nailed It! too. And after you buy this book, go to mrchocolate.com for his amazing chocolates and visit his shops in New York!”—Nicole Byer