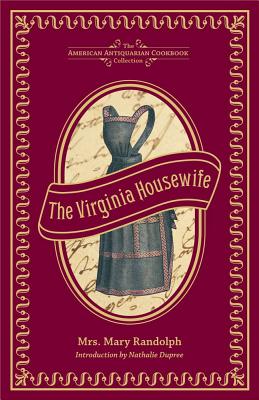 
Special Order
Considered by many culinary historians to be the first real American cookbook (and all describe it as the first regional cookbook), Virginia Housewife was published in 1824 in Washington, DC. This volume in the American Antiquarian Cookbook Collection is an American classic: part cookbook, part home management system, and part historical time-capsule complete with recipes, practical cooking techniques, advice on home management, proper manners, and more.

Although Amelia Simmons’s American Cookery claims the title, Mrs. Mary Randolph’s The Virginia Housewife is often cited as the first American cookbook because the recipes originated in American kitchens, having left behind British traditions, ingredients, and methods. Virginia Housewife is also recognized as the nation’s first regional cookbook with a focus on southern-style specialties, some appearing in print for the first time (Ochra Soup, Curry of Catfish, Gumbo, Chicken Pudding, Apoquiniminc Cakes). But Randolph also includes local variations of recipes from the West Indies, New England, Spain, and France, all reflecting the influence of many cuisines on Southern cooking. Diverse offerings from far-away places include Dough Nuts, Gaspacho, Ropa Vieja, as well as a number of delightful ice cream recipes including, black walnut, quince, pear, citron, and almond. An immediate success, Virginia Housewife was republished at least nineteen times before the Civil War.

For Mrs. Mary, “The grand Arcanum of management lies in three simple rules:Â Let everything be done at a proper time, keep everything in its proper place, and put everything to its proper use.” To this end, much more than just a cookbook, The Virginia Housewife is a complete lifestyle reference providing an introduction to the food, culture, and manners of the antebellum South, as well as housekeeping instructions on topics ranging from soap making to herb drying and silver cleaning—everything that a woman of the nineteenth (or the twenty-first) century might desire to know.

This facsimile edition of Mary Randolph’s Virginia Housewife was reproduced by permission from the volume in the collection of the American Antiquarian Society, Worcester, Massachusetts. Founded in 1812 by Isaiah Thomas, a Revolutionary War patriot and successful printer and publisher, the Society is a research library documenting the life of Americans from the colonial era through 1876. The Society collects, preserves, and makes available as complete a record as possible of the printed materials from the early American experience. The cookbook collection includes approximately 1,100 volumes.

With a prestigious lineage including familial ties to Pocahontas and Thomas Jefferson, Mrs. Mary Randolph lived the later part of her life in Richmond where she ran a boarding house with her husband. Mrs. Mary became so well known for her cooking that during the Revolutionary War it was rumored that her life was spared by virtue of her cooking ability. Mrs. Mary passed away in 1828 and was the first person to be buried at what would become Arlington National Cemetery.