Solve for Happy: Engineer Your Path to Joy (Paperback) 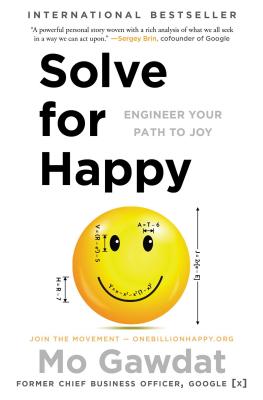 Solve for Happy: Engineer Your Path to Joy (Paperback)


Usually Ships in 1-5 Days
In this “powerful personal story woven with a rich analysis of what we all seek” (Sergey Brin, cofounder of Google), Mo Gawdat, Chief Business Officer at Google’s [X], applies his superior logic and problem solving skills to understand how the brain processes joy and sadness—and then he solves for happy.

In 2001 Mo Gawdat realized that despite his incredible success, he was desperately unhappy. A lifelong learner, he attacked the problem as an engineer would: examining all the provable facts and scrupulously applying logic. Eventually, his countless hours of research and science proved successful, and he discovered the equation for permanent happiness.

Thirteen years later, Mo’s algorithm would be put to the ultimate test. After the sudden death of his son, Ali, Mo and his family turned to his equation—and it saved them from despair. In dealing with the horrible loss, Mo found his mission: he would pull off the type of “moonshot” goal that he and his colleagues were always aiming for—he would share his equation with the world and help as many people as possible become happier.

In Solve for Happy Mo questions some of the most fundamental aspects of our existence, shares the underlying reasons for suffering, and plots out a step-by-step process for achieving lifelong happiness and enduring contentment. He shows us how to view life through a clear lens, teaching us how to dispel the illusions that cloud our thinking; overcome the brain’s blind spots; and embrace five ultimate truths.

No matter what obstacles we face, what burdens we bear, what trials we’ve experienced, we can all be content with our present situation and optimistic about the future.
Mo Gawdat is the Chief Business Officer at Google’s [X]. In the last ten years he has made happiness his primary topic of research, diving deeply into literature and conversing on the topic with thousands of people in more than a hundred countries. He is also a serial entrepreneur who has cofounded more than twenty businesses. He speaks Arabic, English, and German. In 2014, motivated by the tragic loss of his son, Ali, Mo began pouring his findings into his first book, Solve for Happy.