Two Heads: A Graphic Exploration of How Our Brains Work with Other Brains (Hardcover) 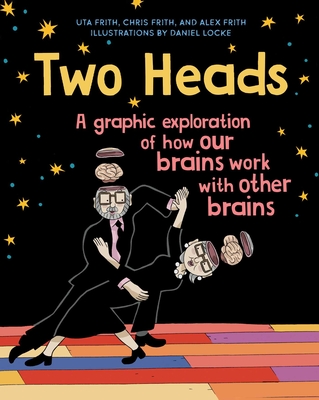 Two Heads: A Graphic Exploration of How Our Brains Work with Other Brains (Hardcover)


Usually Ships in 1-5 Days
This “charming and addictively accessible introduction to neuroscience” (Steven Pinker) takes us on a highly entertaining tour through the wonders and mysteries of the human brain—from a renowned husband-and-wife team of cognitive neuroscientists.

Professors and husband-and-wife team Uta and Chris Frith have pioneered major studies of brain disorders throughout their nearly fifty-year career. Here, in this “pleasing mix of wonder, genial humor, and humility” (Kirkus Reviews, starred review), they tell the compelling story of the birth of neuroscience and their paradigm-shifting discoveries across areas as wide-ranging as autism and schizophrenia research, and new frontiers of social cognition including diversity, prejudice, confidence, collaboration, and empathy.

Working with their son Alex Frith and artist Daniel Locke, the Friths delve into a wide range of complex concepts and explain them with humor and clarity. You’ll learn what it means to be a “social species,” explore what happens when we gather in groups, and discover how people behave in pairs—when we’re pitted against each other, versus when we work together. Is it better to surround yourself with people who are similar to yourself, or different? And, are two heads really better than one?

Highly original and ingeniously illustrated, Two Heads is a “magical book...[and] a fantastically fun way to learn about the brain, the mind, and the lives of two of the world’s most brilliant scientists” (Sarah-Jayne Blakemore, author of Inventing Ourselves).
Uta Frith is Emeritus Professor of Cognitive Development at the Institute of Cognitive Neuroscience at University College London. She is a member of the Senate of the Leopoldina, the German National Academy of Sciences, and a Foreign Associate of the NAS. Uta is known for her research on autism and dyslexia and was listed in 2014 as among the 200 most eminent psychologists of the modern era.

Chris Frith is Emeritus Professor of Neuropsychology at the Wellcome Centre for Human Neuroimaging at University College London, Visiting Professor at the Interacting Minds Centre, Aarhus University, and Honorary Research Fellow at the Institute of Philosophy, University of London. He is a pioneer in the application of brain imaging to the study of mental processes and in 2016, he was listed among the top 10 most influential brain scientists of the modern era by Science.

Daniel Locke is an artist and graphic novelist based in Brighton, UK. Since 2013, much of his work has been informed and shaped by the discoveries of contemporary science. He’s worked with Nobrow, Arts Council England, The Wellcome Trust, and The National Trust.

Alex Frith has been a children’s nonfiction author since 2005. Working exclusively for Usborne Publishing, he has written over fifty books covering almost any subject you can think of, from the origins of the Universe to the meaning behind world religions, from extinct animals to prototype AIs.
“The authors and illustrator convey a pleasing mix of wonder, genial humor, and humility, as husband and wife banter about their work and their son provides the narrative cohesion and framing. The illustrations vividly capture both the significance of the scientific experiments and the unique familial experiences of the Friths ... [B]y the end of this refreshing journey, readers will be much further down the path toward understanding. An enlightening, inspirational scientific voyage that highlights the importance of collaboration.”
--Kirkus Reviews, starred review

“Uta and Chris chaperone the reader through opaque mysteries of academia, explicating a range of experiments and case studies on different aspects of how the mind operates ... Personal anecdotes wind a path through dense topics made accessible for general readers.”
--Publishers Weekly, review

“A charming and addictively accessible introduction to neuroscience, featuring a pair of pioneers who have illuminated some its deepest implications for thought, emotion, and psychopathology.”
--Steven Pinker, Johnstone Professor of Psychology, Harvard University, and the author of How the Mind Works and Rationality

"I have never seen anything like this. It is an engaging story of the careers – and the love affair – of two of the world’s leading cognitive neuroscientists. It is a witty and accessible introduction to the brain and how it works. It is a cutting-edge exploration of issues such as schizophrenia, autism, prejudice, and empathy. Oh, and it’s also an absolutely beautiful graphic novel. Two Heads is a triumph and a delight."
--Paul Bloom, Professor of Psychology at University of Toronto and author of The Sweet Spot

"Two Heads breaks the mold. It's a fabulous book in graphic form about the lives and work of a cognitive neuroscience power couple who have illuminated what has come to be called the 'social brain.'  It is, in fact, a social experiment, a collaboration between son and parents. Read it if you are interested in the topic, or if you simply want to have a very enjoyable experience."
--Joseph LeDoux, Professor of Neural Science at New York University, and author of The Deep History of Ourselves: The Four-Billion-Year Story of How We Got Conscious Brains

"This beguiling, cheeky, and endlessly thought-provoking book uses the science of social cognition and the unassuming form of the graphic novel to address profound questions that have vexed scientists and philosophers for centuries: Do we possess free will? Did we evolve to cooperate or compete? Are racism, sexism, and other forms of bias hardwired into us, or can we grow beyond them? What is an 'individual,' really? It's also an affectionate tribute to the extraordinary legacies of researchers Uta and Chris Frith by their son, Alex. This book will change the ways you think about the ways you think."
--Steve Silberman, author of NeuroTribes: The Legacy of Autism and the Future of Neurodiversity

"This magical book takes you on two intertwined journeys. One is a scientific journey through a multitude of fascinating studies into the brain and the mind. The second is a personal journey that follows Professors Chris and Uta Frith's lives, from how they met as clinical psychology students in London in the swinging sixties to their lives as scientists, working together to understand how the human brain makes us social beings. Captivatingly written by the Friths together with their son, Alex Frith, the book is illustrated with wonderful cartoons of the protagonists and their collaborators and students, as well as all the experiments they describe. What a fantastically fun way to learn about the brain, the mind and the lives of two of the world's most brilliant scientists."
--Sarah-Jayne Blakemore, Professor of Psychology at the University of Cambridge and author of Inventing Ourselves