Look at This Blue (Paperback) 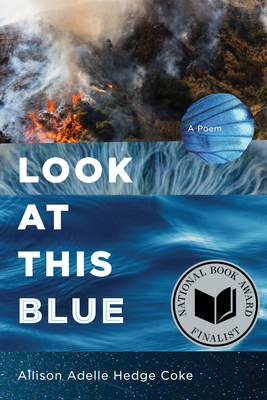 Look at This Blue (Paperback)

Finalist for the 2022 National Book Award in Poetry

Interweaving elegy, indictment, and hope into a love letter to California, Look at This Blue examines America's genocidal past and present to warn of a future threatened by mass extinction and climate peril.

Truths about what we have lost and have yet to lose permeate this book-length poem by American Book Award winner and Fulbright scholar Allison Adelle Hedge Coke. An assemblage of historical record and lyric fragments, these poems form a taxonomy of threatened lives--human, plant, and animal--in a century marked by climate emergency. Look at This Blue insists upon a reckoning with and redress of America's continuing violence toward Earth and its peoples, as Hedge Coke's cataloguing of loss crescendos into resistance.

Allison Adelle Hedge Coke, a Fulbright scholar, First Jade Nurtured SiHui Female International Poetry Award recipient, recent Dan and Maggie Inouye Distinguished Chair in Democratic Ideals, and U.S. Library of Congress Witter Bynner fellow, has written seven books of poetry, one book of nonfiction, and a play. Following former fieldworker retraining in Santa Paula and Ventura in the mid-1980s, she began teaching, and she is now a distinguished professor of creative writing at the University of California, Riverside. Hedge Coke is the editor of ten anthologies and has served as an editor and guest editor for several magazines and journals, most recently World Literature Today. The social media hashtag #poempromptsforthepandemic hosts hundreds of original prompts she crafted as public outreach during the COVID-19 pandemic. A career community advocate and organizer, she most recently directed UCR's Writers Week, the Along the Chaparral/Pūowaina project, and the Sandhill Crane Migration Retreat and Festival.