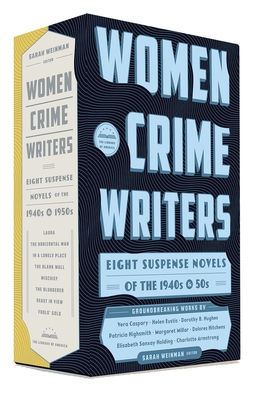 
Email or call for price
The Library of America and editor Sarah Weinman redefine the classic era of American crime fiction with a landmark collection of eight brilliant novels by the female pioneers of the genre, the women who paved the way for Gillian Flynn, Tana French, and Lisa Scottoline.

Though women crime and suspense writers dominate today’s best seller lists, the extraordinary creations of the mid-century female pioneers of the genre are largely unknown. Their work, influential in its day and still vibrant and extraordinarily riveting, is long overdue for rediscovery. Now The Library of America makes these classic books available in a deluxe two-volume collector’s edition.

From the 1940s, here are Vera Caspary’s famous career girl mystery Laura; Helen Eustis’s intricate campus thriller The Horizontal Man; Dorothy B. Hughes’s In a Lonely Place, the terrifyingly intimate portrait of a serial killer; and Elisabeth Sanxay Holding’s The Blank Wall, in which a wife in wartime is forced to take extreme measures when her family is threatened.

The 1950s volume includes Charlotte Armstrong’s Mischief, the nightmarish drama of a child entrusted to a psychotic babysitter; Patricia Highsmith’s brilliant The Blunderer, which tracks the perverse parallel lives of two men driven toward murder; Margaret Millar’s Beast in View, a relentless study in madness; and Dolores Hitchens’s Fools’ Gold, a hard-edged tale of robbery and redemption.

Both volumes are available separately in print and e-book editions.

LIBRARY OF AMERICA is an independent nonprofit cultural organization founded in 1979 to preserve our nation’s literary heritage by publishing, and keeping permanently in print, America’s best and most significant writing. The Library of America series includes more than 300 volumes to date, authoritative editions that average 1,000 pages in length, feature cloth covers, sewn bindings, and ribbon markers, and are printed on premium acid-free paper that will last for centuries.
Sarah Weinman is widely recognized as a leading authority on crime fiction. She is the editor of Troubled Daughters, Twisted Wives: Stories from the Trailblazers of Domestic Suspense (Penguin, 2013), which the Los Angeles Review of Books called “simply one of the most significant anthologies of crime fiction, ever.” She is the news editor for Publishers Marketplace and her work has appeared in The New York Times, The Wall Street Journal, the National Post, the Los Angeles Times, and The Washington Post, among other publications. Weinman lives in Brooklyn, New York.
"This set is a must-have addition to any crime fiction fan's bookcase." —The Strand Magazine

"The novels in the anthology are page-turners, every one." —Megan Abbott

"With its gutsy, crackling eight novels, Women Crime Writers challenges the perception of American crime fiction as a genre shaped by men, and dominated by brooding male figures." —Brigit Katz, Women in the World