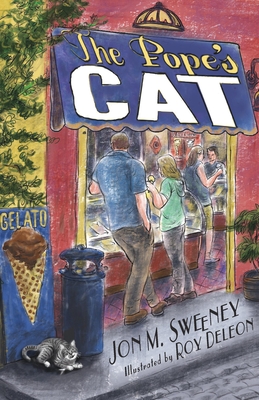 
Usually Ships in 1-5 Days
“A heartwarming tale, which gives the papacy a human touch.” –Christopher Lamb, Rome correspondent, The Tablet

Meet Margaret — the Pope's cat — in the very first book in this best-selling series by Jon M. Sweeney!

This is the story of a stray born on the Via della Conciliazione in Rome, how she’s adopted by the Pope, and then “rules” the Vatican from museum to floorboard! First in a new series.

No one has a closer view of what’s happening in the world’s tiniest nation, Vatican City, than Margaret, the Pope’s new cat. But she wasn’t always Margaret, and she wasn’t always the Pope’s cat. She started out as a stray on the streets of Rome, and there are those in the Vatican who wish she’d never been allowed inside.

This fun, adorable new character will appeal to all kids!  Here is a cat who does what she likes regardless of what others, even someone like the Pope, expects of her—even when the Queen of England comes on a state visit!

This new fiction series is intended for Catholic schools, elementary school teachers, Catholic librarians, superintendents of schools, reading specialists, educators, catechists, school principals, Catholic homeschoolers, and parents.
Jon M. Sweeney is an author, husband, and father of four. He has been interviewed on many television programs including CBS Saturday Morning, Fox News, and PBS's Religion and Ethics Newsweekly. His popular history The Pope Who Quit: A True Medieval Tale of Mystery, Death, and Salvation was optioned by HBO. He's the author of thirty-five other books, including The Complete Francis of Assisi, When Saint Francis Saved the Church, the winner of an award in history from the Catholic Press Association, and The Enthusiast: How the Best Friend of Francis of Assisi Almost Destroyed What He Started. Sweeney is also the author of The Pope's Cat series for children. He presents often at literary and religious conferences, and churches, writes regularly for America in the US and The Tablet in the UK, and is active on social media (Twitter @jonmsweeney; Facebook jonmsweeney).

Roy DeLeon is an Oblate of St. Benedict, a spiritual director, a workshop facilitator focused on creative praying, an Urban Sketcher, and a professional illustrator. In addition to illustrating The Pope's Cat series, he is also the author of Praying with the Body: Bringing the Psalms to Life. He lives in Bothell, Washington, with his wife, Annie.