The Bridge: The Building of the Verrazano-Narrows Bridge (Hardcover) 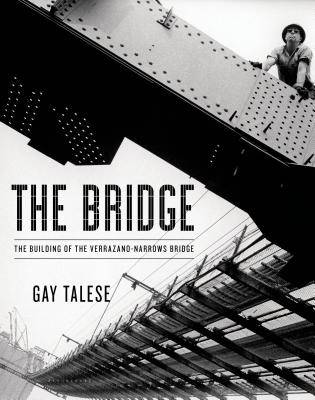 The Bridge: The Building of the Verrazano-Narrows Bridge (Hardcover)

Toward the end of 1964, the Verrazano (or, more properly, Verrazzano) Narrows Bridge—linking the New York City boroughs of Brooklyn and Staten Island—was completed. Fifty years later, it remains an engineering marvel. At 13,700 feet (more than two and a half miles), it is still the longest suspension bridge in the United States and the sixth longest in the world.

Gay Talese, then early in his career at the New York Times, closely followed the construction, and soon after the opening of this marvel of human ingenuity and engineering, he chronicled the human drama of its completion—from the construction workers high on the beams to the backroom dealing that displaced whole neighborhoods to make way for the bridge. Now in a new, beautifully packaged edition featuring dozens of breathtaking photos and architectural drawings, The Bridge remains both a riveting narrative of politics and courage and a demonstration of Talese’s consummate reporting and storytelling that will captivate new generations of readers.

Gay Talese is the bestselling author of eleven books including The Kingdom and the Power:The, Thy Neighbor's Wife, Honor Thy Father, and A Writer's Life. Bloomsbury has published two collections of his writing, The Gay Talese Reader and The Silent Season of a Hero. Talese lives in New York City.

“Mr. Talese has written a vivid, highly readable story of the building of the bridge. He has described movingly the people caught up in the project--the engineers, the workers, the displaced, and he sees the bridge as a human rather than a mechanical achievement . . . imparting drama and romance to this bridge-building story.” —The New York Times Book Review

“This book has the charm of Max Miller's I Cover the Waterfront and the precision of Hemingway's Death in the Afternoon.” —St. Louis Post-Dispatch

“Only a writer in love with his subject could have produced so charming a narrative about a bridge. There are many stories within the story of The Bridge. All are worth reading.” —Houston Post