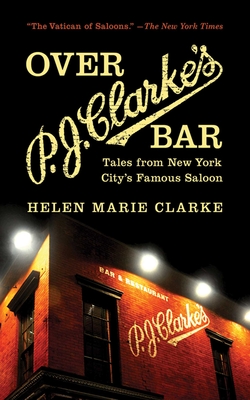 
Special Order
How did a bar like P. J. Clarke’s saloon become the beloved watering hole for Frank Sinatra, Marilyn Monroe, Jacqueline Kennedy, Rocky Marciano, and Buddy Holly (not to mention the fictional Don Draper)? And what was it about their bacon cheeseburger that caused Nat King Cole to pronounce it “the Cadillac of burgers”?

Established  in 1884 and bought in l904 by Patrick “Paddy” Joseph Clarke, this Irish saloon in a beautiful Victorian building on the corner of Third Avenue and Fifty-Fifth Street has captivated generations of New Yorkers—from the working class to entertainers, athletes, business executives, and members of high society. Here, finally, is the story of this famed saloon.   Learn more about the bar where:

Over P. J. Clarke’s Bar is at once a nostalgic look back at one of New York City’s most famous landmark saloons (in an age when they are quickly disappearing) and an eloquent memoir by the former owner’s grandniece, which details in sharp relief the excitement of days gone by—when as a young girl she entered through the “ladies” entrance and watched bartenders handing buckets of beer to thirsty customers on the sidewalk through the “to go” window.