Authentic: A Memoir by the Founder of Vans (Hardcover) 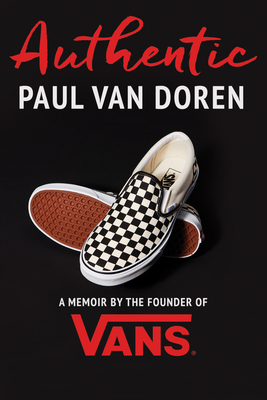 Authentic: A Memoir by the Founder of Vans (Hardcover)


Usually Ships in 1-5 Days
In the tradition of bestsellers such as Shoe Dog, Authentic is a surprisingly candid, compelling memoir by a high school dropout who went on to establish one of the world's most iconic brands. You may not have known their creator, but you certainly know the shoes: for more than four generations, Vans shoes have been synonymous with cool.
Now in Authentic, a memoir written by Paul Van Doren and published just before his May 2021 death, the charismatic founder of Vans shares his story of heading West and capturing the American dream.   Authentic is a celebration of Van Doren’s remarkable life and the iconic brand he built, beloved by skateboarders, creatives, and fans everywhere for its laid-back, colorful SoCal vibe, and famous for its people-oriented company culture. In Authentic, he shares his unlikely journey from high-school dropout to sneaker-industry legend. A blue-collar kid with no higher education and zero retail experience, Van Doren started out as a 16-year-old “service boy” at a local rubber factory. Over the next few decades, he leveraged a knack for numbers, a genius for efficiency, and the know-how to make a great canvas tennis shoe into an all-American success story. What began as a family shoe business has today evolved into a globally recognized brand with billions of dollars of annual revenue. Van Doren is not just an entrepreneur, he’s an innovator. In 1966, when the first House of Vans store opened, there were no stand-alone retail stores just for sneakers. Paul’s bold experiments in product design, distribution, and marketing (Why not sell custom shoes? Single shoes?), aided by legions of fans — skateboarders, surfers, even Sean Penn wearing Vans’ famous checkerboard slip-on shoe in the film Fast Times at Ridgemont High — made Vans a household name. But there was also back-breaking work, a shocking bankruptcy, family turmoil, and a profound shift in how customers think about athletic shoes. The book details Van Doren’s personal life, but also hard-won business lessons learned over six turbulent decades in the shoe trade: the importance of deep-rooted values, of improvisation, of vision (and revision), and above all, of valuing people over profits. Authentic is Paul Van Doren’s written legacy and his lessons for the innovators of tomorrow. Bracingly forthright and totally entertaining, Authentic is a business memoir by an American original.
Paul Van Doren is the founder of Vans, the world's most groundbreaking shoe brand. He led the company from its inception in 1965 until 1988. Two of his children are still leaders at Vans. He worked as a valued brand ambassador until his passed away in May of 2021