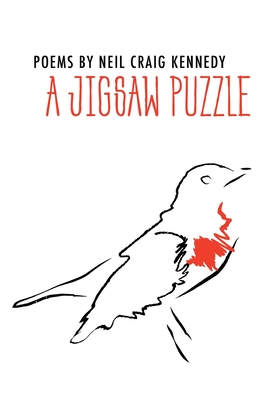 Neil Kennedy's new book, A Jigsaw Puzzle is like no other book of poetry I have ever read. From the very beginning-Flower on the floor./Somebody has lost their bloom./I am very careful.-Kennedy pulls you in, though really, as with any jigsaw puzzle, you can enter anywhere and find yourself unable to stop being enchanted by this world that gets put together one tercet at a time. Birds of all species, one chickadee setting up its home into two birdhouses, music from next door, problematic snow, little Jesus at the gas station, hourglasses, cats and dogs, timepieces and shoelaces, software malfunctions in the forgiveness machine, hammer and teacup going home together, hesitating clouds deciding whether to cast shadows or not, daffodils breaching their contract, card catalogue in the junkyard with one drawer open-this poignantly quiet rhythm and boldly observant eye unfold a landscape that is defined often by the spaces between places and moments in time. In one of the occasional breaks of the tercet form the poet writes "Behind one man's voice" and then then there's space and then "Another man's voice." In the poems to which we turn for insight and illumination we often sense poet and shadow self, the two voices talking to each other and including us in the conversation. Kennedy's A Jigsaw Puzzle, offers you a conversation to which you will want to return again and again.