The Rewards of Learning Greek and Hebrew: Discovering the Richness of the Bible in Its Original Languages (Paperback) 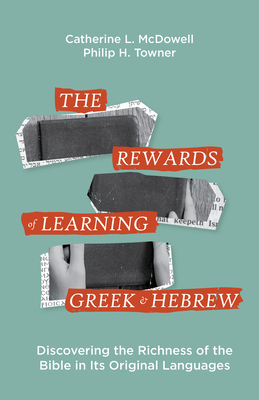 The Rewards of Learning Greek and Hebrew: Discovering the Richness of the Bible in Its Original Languages (Paperback)


Usually Ships in 1-5 Days
Why study biblical languages? The Rewards of Learning Greek and Hebrew: Discovering the Richness of the Bible in Its Original Languages is written to convince you that it's worth it Professors Catherine L. McDowell and Philip H. Towner have spent years opening the eyes of students to the riches that await those who study Hebrew and Greek, and they invite you to listen in. This book is designed for people who have never studied the biblical languages--everything is in English or English script, and everything is clearly explained.

The Rewards of Learning Greek and Hebrew contains a number of case studies--some from the Hebrew Bible and some from the New Testament--that demonstrate the kind of accuracy and insight that await those who study the biblical languages. Each case study is accompanied by a testimonial from a student whose understanding of the Bible has been enriched by studying Greek or Hebrew.

With encouragements from Christian scholars and pastors sprinkled throughout, The Rewards of Learning Greek and Hebrew gives you a taste of what awaits the student of biblical languages and encourages you to take the plunge.

About the Authors
Dr. Catherine McDowell is Associate Professor of Old Testament at Gordon-Conwell Theological Seminary in Charlotte, North Carolina. She previously taught Old Testament at Wheaton College in Illinois. Dr. McDowell is the author ofThe Image of God in the Garden of Eden (Eisenbrauns) and the study notes for 1-2 Samuel, 1-2 Kings, and 1-2 Chronicles in the ESV Archaeological Study Bible (Crossway). She is in the process of founding a new seminary in Cap-Ha tien, Haiti that will have a significant emphasis on biblical languages and original language exegesis.

The Rev'd Dr Philip H. Towner is a professor at Pontifical Urbaniana University in Rome, where he teaches translation studies, and a visiting professor of NT exegesis and translation at the Pontifical Biblical Institute, Rome. He is an Episcopal priest in the New York Diocese. As the former Dean and Director of the Eugene A. Nida Institute for Biblical Scholarship at American Bible Society in New York City, he was co-director of the Nida School of Translation Studies, based in Misano Adriatco, Italy, and served as the Director of Translation Services of the United Bible Societies. He is the author and editor of several books and numerous articles in the fields of biblical studies and translation studies. When not in Rome, he lives in Hoboken, NJ.