Rock Bottom at the Renaissance: An Emo Kid's Journey Through Falling In and Out of Love In and With New York City (Paperback) 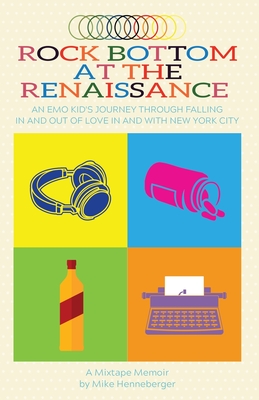 Rock Bottom at the Renaissance: An Emo Kid's Journey Through Falling In and Out of Love In and With New York City (Paperback)

Before Mike Henneberger was an Emmy-winning producer with credits from Comedy Central, Rolling Stone, Billboard, Spin, and Vice, he was just another lost soul in New York City, stumbling down a path paved by mental illness, and littered with pieces of a broken heart and a broken mind. Rock Bottom at the Renaissance: An Emo Kid's Journey Through Falling In and Out of Love In and With New York City is Mike's mixtape memoir that follows those pieces through a mental breakdown that spanned his first years as a Texas transplant in NYC, brainwashed by the New York romance that films, TV, books, and music, sold him.

Much of Rock Bottom At The Renaissance is set in a hotel room during a debaucherous weekend of self-imposed isolation and self-destructive introspection, and navigates the dark tunnels of Henneberger's booze and drug-addled mind, it's larger in scope - taking in much of his past. Henneberger tells of his south Texas childhood defined by divorce, sibling rivalry, and an instability that forced him to navigate the most important years of a young man's life without a compass. He takes us through his minor successes - touring in bands, launching a magazine, and performing stand-up comedy - as he begins to wonder if the sense of confidence instilled by them is actually delusion. We get a glimpse into his time in the U.S. Army, which was meant to increase his sense of purpose, but only increased his chemical dependencies and triggered mental illness. At the heart of the book, are Henneberger's quest to find love and his relationship with music and the power that it has to get us through life's toughest moments.

Despite the sense of abject loneliness and the existential dread coursing through its sentences, there is a great deal of hope within these pages. Partly that's through the history conveyed by Henneberger, which reveals who he is, how he ended up in that situation and the clarity of purpose that comes as past and present weave together to turn a broken, lost person into someone with purpose and optimism.

The Dangerous Summer and Bayside are just two of many bands - including Jimmy Eat World, The Smoking Popes, Bright Eyes, Death Cab For Cutie, Alkaline Trio, Mayday Parade, and The Wonder Years - whose songs feature prominently in Rock Bottom At The Renaissance as lyrics appear as a soundtrack to the chapters. Because music, and those bands in particular, are crucial to Henneberger overcoming his demons.

The redemption and salvation in these songs is undeniable, but there's more to this memoir. It is, as Henneberger puts it, about "romanticizing New York City and letting your ideas guide you rather than reality" and the detrimental results. It's about being in love with the person you think will make you whole and coming to terms with the fact that they never will - nor would have done. That's something Henneberger navigated - viscerally, painfully - in that hotel, but also something he contends with in the narratives that surround that moment, and flashes that look back and forward.

What is obvious - as obvious as an intoxicated and inebriated brain can make it - is the lesson that Rock Bottom At The Renaissance offers: happiness had to be found within himself, rather than in a missing jigsaw piece. It's neither a sanctimonious nor self-righteous epiphany, nor one that he leans on in his book. Ultimately, it's a story of a hell that Henneberger got through, to inspire those who need help getting through theirs.