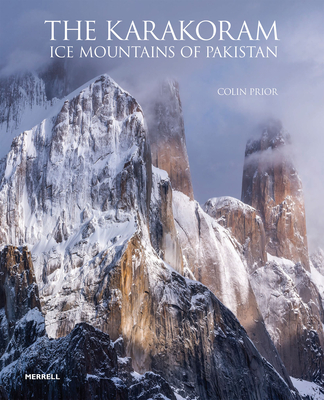 The ice mountains of the Karakoram are among the world's greatest natural treasures. At 8611 metres (28,251 ft), K2 is the second tallest mountain on Earth. There are three other mountains in the range that top 8000 metres (26,247 ft) - Gasherbrum I, Broad Peak and Gasherbrum II - and more than 60 peaks above 7000 metres (22,966 ft). Extending in a south-easterly direction from the north-eastern tip of Afghanistan and spanning the borders of Pakistan, India and China, the Karakoram is part of a complex of ranges in Central Asia that includes the Hindu Kush to the west and the Himalayas to the south-east. These mountains, however, are distinctive. This is the most glaciated region on the planet outside the Arctic and Antarctic. But while most of the world's great peaks are almost blanketed in snow and ice, the Karakoram is an exception: the mountains are so vertical that they rapidly shed snow, leaving their bold, jagged outlines of black granite glistening in the sun. The name of the range comes from the Turkic term for 'black rock' or 'black gravel'.

The well-known landscape photographer Colin Prior was initially inspired to visit the Karakoram in his early twenties: in his local library he picked up the book In the Throne Room of the Mountain Gods (1977) by the American climber and photographer Galen Rowell, and was instantly captivated by images of the sharp, fractured peaks and vast glaciers. His first trip to the Karakoram came in the mid-1990s, and he has been passionate about these mountains ever since. Prior's new book is the result of six expeditions he has made to the Gilgit-Baltistan region of north-east Pakistan over the last six years. Because the region is so remote, there are no established base camps, and each expedition requires careful planning and miles of trekking with a large team of guides, porters and ponies to carry the equipment and provisions. There are regular rock falls and perilous snow-covered crevasses to contend with. The reward for Prior is what he calls the ultimate mountain landscape: 'The scenery is graphic, with towers, minarets and cathedrals of rock.' This beautifully produced volume showcases the breathtaking beauty of the Karakoram in some 130 duotone and colour photographs. The images are largely arranged to follow Prior's progress up the glaciers, and are accompanied by well-chosen quotations from accounts of historical expeditions to the region. A selection of 'making of' images at the end of the book highlights the challenges of documenting the most exceptional mountain range in the world.