Star Chamber Matters: The Court and Its Records (Institute of Historical Research) (Hardcover) 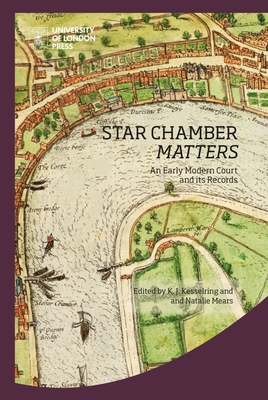 Star Chamber Matters: The Court and Its Records (Institute of Historical Research) (Hardcover)


Special Order
A comprehensive historical study into the birth of the law and legal courts in early modern Britain.

Star Chamber Matters details some of the fascinating, tragic, and startling cases brought before the Star Chamber, an English court that sat at the Royal Palace of Westminster from the late fifteenth century to the mid-seventeenth century. Through close examination of the breadth and depth of cases brought before the court in its day, readers will experience the trials and tribulations of life, love, and death in Tudor Britain. These cases touch on changing gender roles, shifting religious views, and more. Star Chamber Matters witnesses the birth of English common and civil law as we know it today.
Natalie Mears is associate professor in early modern British history at Durham University.

Krista Kesselring is a professor of early modern British history, gender, and the law at Dalhousie University, Canada.