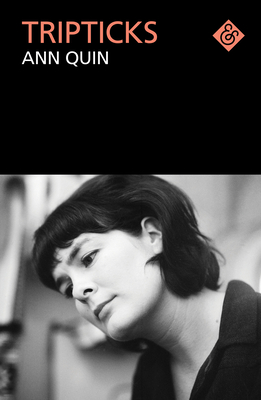 First published in 1972, Ann Quin's fourth and final novel was a radical break from the introspective style she had developed in Three and Passages: a declaration of independence from all expectations.

Brashly experimental, ribald, and hilarious, Tripticks maps new territories for the novel--aspiring to a form of pop art via the drawings of the artist Carol Annand and anticipating the genre-busting work of Kathy Acker through collage and gory satire.

Splattering its pages with the story of a man being chased across a nightmarish America by his "first X-wife," and her "schoolboy gigolo," Tripticks was ground zero for the collision of punk energy with high style.

Ann Quin (1936-1973) was a working-class writer from Brighton, England. She was at the forefront of British experimentalism in the 1960s along with B. S. Johnson and Alan Burns, and also lived in the United States in the mid-sixties, working closely with American writers and poets, including Robert Creeley. Prior to her death, she published four novels: Berg (1964), Three (1966), Passages (1969) and Tripticks (1972). A collection of short stories and a fragment of her unfinished last novel, The Unmapped Country (edited by Jennifer Hodgson), was published by And Other Stories in 2018.