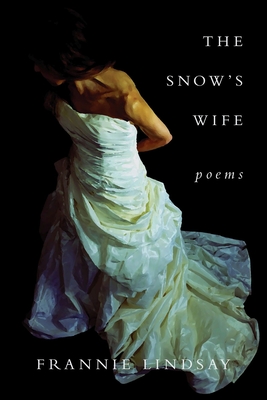 
Special Order
The Snow’s Wife presents a dispassionate examination of the final months of a marriage, ending with a spouse's death. It examines the daily minutiae of caregiving, both the tender and the distasteful, that lend startling poignancy to unbearable hardship. Frannie Lindsay’s poems chronicle how these challenges shock both self and God, dismantling that spiritual partnership and creating a new one that seems at first a temporary refuge, but is later revealed to be sturdy and permanent. This collection explores the ways in which intimacy becomes at once tender and gritty in the face of loss. These poems investigate how we remember, and how we begin the patient reshaping of the bereft self.

The Snow’s Wife reaches beyond the sorrow of the poems’ speaker and includes the reader in the difficult, loving acceptance of mortality. Unafraid to look beyond the sentimentality of grief, Lindsay draws an unflinching and intimate portrait of a conflicted yet tender relationship. Illustrating the strain that an expected death can place upon a marriage, and the myriad and surprising ways in which such strain expands the heart, The Snow’s Wife examines the crises of faith that arise naturally during intimate end-of-life caregiving.
Frannie Lindsay's previous volumes include If Mercy, Our Vanishing, Mayweed, Lamb, and Where She Always Was. Her work has appeared in the Atlantic Monthly, the American Poetry Review, the Yale Review, Field, Plume, Salamander, and in TheBest American Poetry 2014. She teaches poetry workshops specializing in grief and trauma and is a classical pianist.
Grand Prize Honorable Mention
— Eric Hoffer Awards

“Frannie Lindsay’s poems recall Tsvetayeva’s epistolary prose in which corporeality is freed from its external boundaries, embracing, instead, the transcendent where, as Tsvetayeva wrote, ‘a dream hand take/Another hand’s dream.’ The sleeper, Lindsay’s late husband, is guided back home: ‘do not be afraid/here is a harpsichord/here is a greyhound/here the first phrase of a cello sonata/and the slowed wind of your wife’s silver hair.’ The book extends beyond elegies to other hard-hitting evocations. In a prayer for her rapist, Lindsay offers ‘I hope he has learned/to slink unnoticed across the nights’ sad meadows, leaving the aster/alone in their clusters.’ God, Lindsay beckons, is both ‘beloved and exiled’ …‘we can/no longer awaken/even one star. The Snow’s Wife is a remarkable book of unbroken, emphasized silences, of enduring heart and intuition: ‘The snow, if it was kind, would fall again like old magnolia petals/loosening all at once because it’s time.’”
— Dzvinia Orlowsky, author of Bad Harvest

“Why, when Frannie Lindsay calls me to walk with her on the way of the cross, do I find myself saying yes, yes, thank you? Is it because her beautiful, pungent, sensual laments confirm that I'm not crazy, that the world is in fact as sad and full of grace as I thought? Is it because Lindsay has already written several fiercely lovely books of poems that are essential to me, such that now I will follow her voice absolutely anywhere? Yes, and yes, and thank you.”
— Patrick Donnelly, author of Little-Known Operas