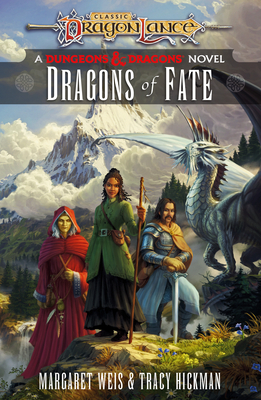 
Unavailable
Not Yet Published

This is book number 2 in the Dragonlance Destinies series.

A courageous heroine trapped in the distant past is determined to return to her own time—without changing the shape of the world forever—as the New York Times bestselling Dragonlance series continues in the thrilling sequel to Dragons of Deceit.

A clash of powerful magical forces sets off the Graygem of Gargath, sending Destina and her companions deeper into the past than she intended—to the age of Huma Dragonsbane and the Third Dragon War. Now, after the Device of Time Journeying shatters, they must find another way back to their own era, before the Graygem alters history irrevocably and the Third Dragon War ends in defeat for the forces of good.

With the battle raging on, Destina tries desperately to make amends and prevent disaster. Raistlin and Sturm encounter their heroes, Huma and Magius, and must reconcile the myths with the men. Meanwhile, Tasslehoff—shocked that the Knights of Solamnia have never heard of dragonlances—sets out to find the famed weapons.

But as the forces of the Dark Queen close in on the High Clerist’s Tower, Destina’s party must return to their own timeline together—or not at all.
Margaret Weis and Tracy Hickman published their first novel in the Dragonlance Chronicles series, Dragons of Autumn Twilight, in 1984. More than thirty-five years later, they have collaborated on more than thirty novels together in many different fantasy worlds. Hickman is currently working with his son, Curtis Hickman, for The VOID, creating stories and designs for whole-body, fully immersive VR experience. Weis teaches the competitive dog racing sport flyball. She and Hickman are working on future novels in this series.