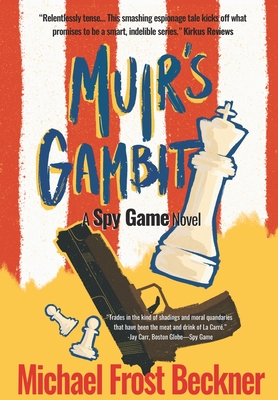 "Charlie March is dead. On a day that promised perfection to the hero of the CIA, an eighteen-minute countdown was all he got to enjoy it once he turned the ignition key and sent an electric spark to his sailboat's engine..."

With Muir's Gambit, Michael Frost Beckner returns to the world of Nathan Muir and Tom Bishop he created in the motion picture Spy Game. A prequel to the film, Muir's Gambit opens forty-eight hours before the events of the Robert Redford/Brad Pitt film with the assassination of retired CIA hero Charlie March and spymaster Nathan Muir's life and career are about to implode. Deputy Director Harker is exploiting March's assassination to rid the Agency of Muir-the "Cold War dinosaur" and life-long devotee of March whose brash style of espionage Harker despises.

For Nathan Muir, Charlie March was where everything started: March recruited him, trained him, forged him into a master spy. But "Nathan Muir" were Charlie March's dying words, and Langley careerists find his murder the perfect opportunity to flush both Muir and their worst Cold War secrets down the CIA memory hole.

Told by the brilliant but hapless, manic but relentless Russell Aiken, this former Muir prot g is consigned to a dead-end career in Langley's legal department. That is, until he's tasked with assassinating Muir himself.

Aiken approaches his "spy game" with both jaded sarcasm and secret yearning. On the run from a crime of passion, Aiken sprints along the edges of madness through a world full of maddening corners.

As the two spies play a dangerous cat-and-mouse game over the dark underbelly of forty years of CIA conspiracies, Muir's Gambit sweeps from the Chosin Reservoir to Cyprus terror bombings, Congo coup d' tat's, Angolan proxy wars, and in the final hours of the Berlin Wall. And for two men untethered from morality, all those lies leave just one final night for redemption.